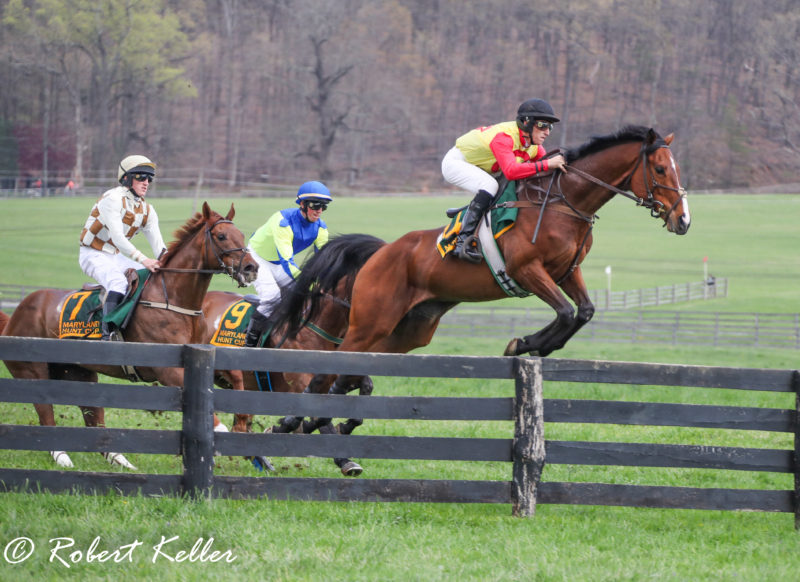 The last Saturday in April was packed with jump racing action, from Maryland to North Carolina! Perhaps the biggest news from this past weekend in racing was Senior Senator scoring an astounding second victory over the storied Maryland Hunt Cup course.  The previous weekend trainer Joe Davies and jockey Eric Poretz swept the Grand National Steeplechase card and this past Saturday, April 28th, they reeled in their second $100,000 Maryland Hunt Cup win with Senior Senator. Poretz and “SS,” as he is called, got to the wire in 9:20:2/5 in soft going.  Only three entries in the field of nine starters completed the race, but all horses were reported safe.  McLane Hendriks was the only rider not cleared to ride from a shoulder injury sustained when he and his mount Old Timer fell at the infamous third fence, one of the tallest on the course. 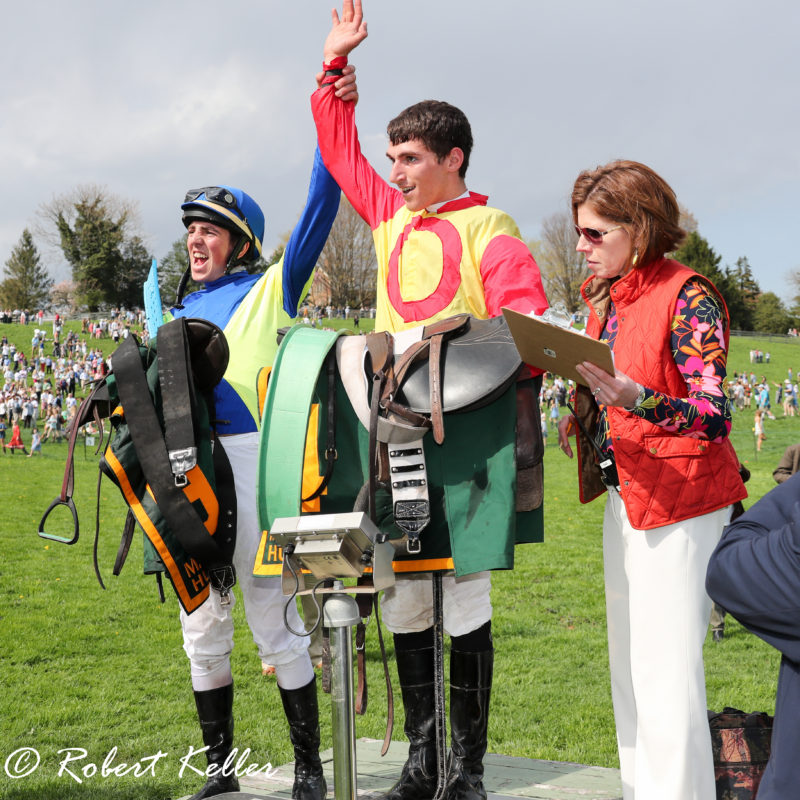 This is Davies’ third consecutive Maryland Hunt Cup win.  This win also gives Davies and Poretz a fairly solid lead on the running for Maryland Steeplechase Association leading trainer and rider titles, in which there are only two race meets left in the series.  This is Horse Racing’s Joe Clancy was on the scene and recounts the victory in Senior Senator captures second Md. Hunt Cup.  You can also read about the day’s racing in the Baltimore Sun’s Senior Senator rolls to victory in the 122ndMaryland Hunt Cupand Don Clippinger’s Senior Senator blazes to second Maryland Hunt Cup victory. Bob Keller’s photosof the Maryland Hunt Cup, a look at the full results and HCP Sports video will make you feel like you were there!

The Maryland Junior Hunt Cup, sponsored in part by the Maryland Steeplechase Association, ran this past Sunday, April 29that Shawan Downs, in Hunt Valley, Md.  The day of racing strictly for junior and young riders attracted 66 entries over 14 different ra

ces including lead line trot, small, Shetland, medium, and large pony flat races, as well as field master’s chases and a young rider timber invitational.  A special thank you to former winning Maryland Hunt Cup jockeys Charles C. Fenwick Jr. riding Puller, Sanna P. Neilson aboard Grinding Speed, and George Hundt on Just Pour It, who all lead a division of the field master’s chases.  Additional thanks goes out to Sheila Fisher and Sarah Katz who also served as race leaders.  Have a look at the resultsand remember those names, you might be seeing them in racing programs at sanctioned races in the future!  You can find more photos from Carol Fenwick hereand Stewart Nickel here.

Check out the Maryland Steeplechase Association standings as of the Maryland Junior Hunt Cup.  Don’t forget to mark your calendars for the MSA Awards Reception on Thursday, June 14th.  Details will be coming out soon.

Coming Up This Weekend…

The 75th running of the Howard County Cup Races is not to be overshadowed by the Virginia Gold Cup or the Kentucky Derby!  The pt-to-pt benefitting the Howard County-Iron Bridge Hounds set post time for it’s first race this Saturday, May 5th at 3pm. The last race is set to run moments before the Kentucky Derby, which will be aired live on a jumbotron. Howard County gives away $12,500 in prize money, the carrot at the end of the stick to attract trainers to the late Maryland spring point-to-point.  This meet also celebrates junior riders and offers field master’s chase races for ponies and horses, a lead line trot race, and a Shetland pony flat race.  You can check out the contenders lined up to compete at the Howard County Cup Races here.