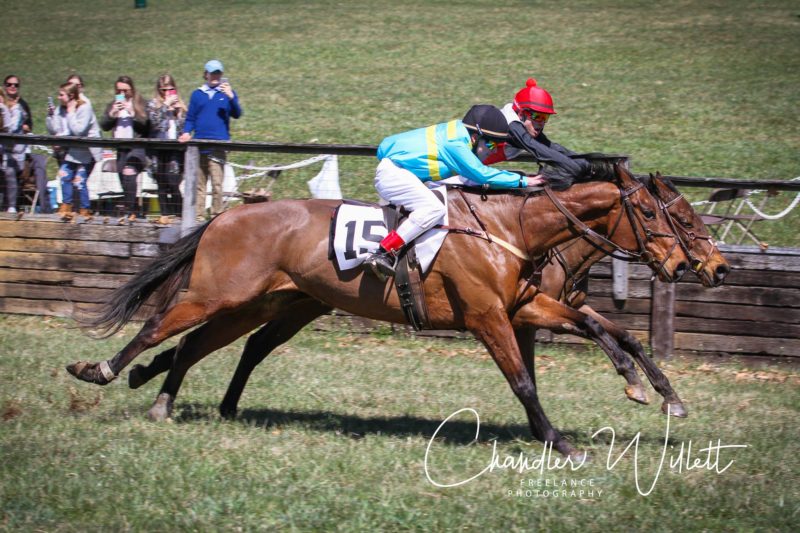 Theo Sushko (L) and Charlie Marquez (R) race towards the wire nose for nose to ultimately dead heat in the horse division of the jr. field master’s chase at GSVH Pt-to-Pt.

A glance at the first three races on the card at the Green Spring Pt-to-Pt might make one think that it was a prep race for the Maryland Hunt Cup, but in fact, they were junior races! Former sanctioned horses, including Catch the Echo, Decoy Daddy, Flaming Arrow, and Guts for Garters with family names like Hendriks, Fenwick, Davies, and McKenna in the irons, in the junior horse division of the field master’s chase made for exciting racing. The day attracted 38 starters in junior races and 37 in open races. Among the results for the day included wins over timber for Certain Swagger, Mystic Strike, and Western Exchange, but perhaps one of the most exciting races of the day was the Stuart S. Janney Memorial Jr. Horse Field Master’s Chase where stable mates Mast Strike (Charlie Marquez) and Rocky’s Affair (Theo Suck) dead heated! Have a look at Bob Keller’s photos from the day to see some of the action, and thanks to Gilman School the races were broadcast live via YouTube.

The MSA Series moves to the Elkridge-Harford Pt-to-Pt this Saturday in Monkton, Maryland.  Mother Nature could potentially throw a wrench into the works by giving Monkton a little snow on Saturday, but the forecast is improving.  The race posted on their website. “As is typical of unpredictable Maryland weather, the wintry forecast for Saturday, while not ideal, is showing signs of turning in our favor. We are continuing to monitor the situation and are hopeful for a great day with full race cards and good footing. Continue to check back for more updates and in the meantime check out the overnights!”

Horses like Raven’s Choice, Imperial Way, and Senior Senator will be using this pt-to-pt as a prep on their route to the Maryland Hunt Cup,

so don’t miss out!  Tickets for the EHHC Pt-to-Pt are also available at the gate, where you can also purchase a race day program in support of the the EHHC Pony Club.

See you at the races!