After a complete cancellation of race meets in 2020, the Maryland Steeplechase Association Governor’s Cup Series resumed in 2021 with every race meet running on its traditional date. On Thursday, June 17, the winners will be celebrated at the annual Awards Reception at the Green Spring Valley Hunt Club. Here are the horses, owners, trainer, and riders taking home the honors this year: 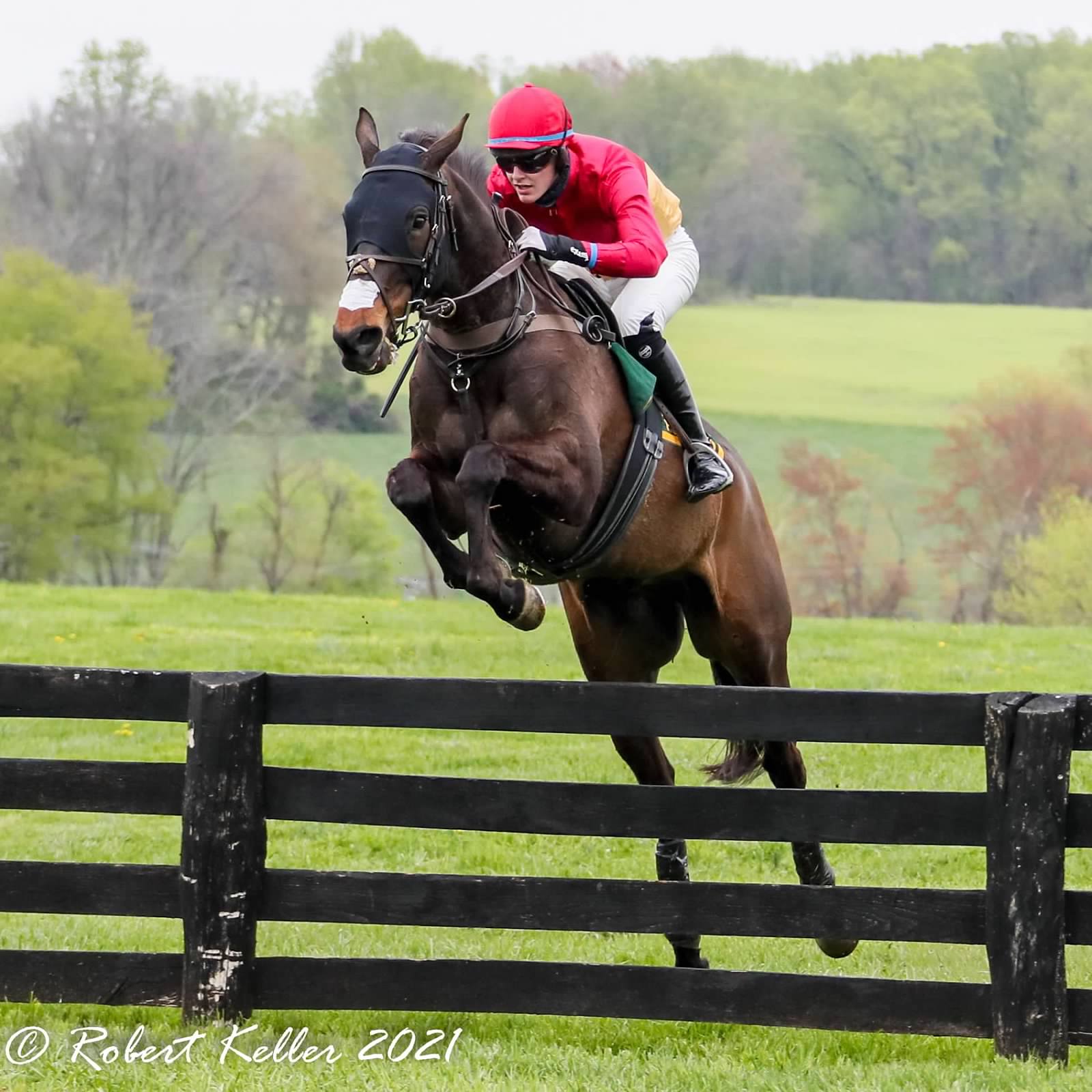 Vintage Vinnie (IRE), a 12-year-old gelding owned by Armata Stables, made his first appearance in the Maryland Steeplechase Association spring circuit in 2018 when he finished second in the Maiden Timber at the My Lady’s Manor. In 2019, he won the Amateur Apprentice Timber at Elkridge and followed that with a second in the Allowance Timber at the Grand National. After a cancellation of all spring meets in 2020, Vintage Vinnie made a winning return in October and officially broke his maiden in the Apprentice Timber at the International Gold Cup in Virginia. This year, his season started with a prep run in the Training Flat at the Green Spring Valley Point-to-Point. From there he went to the My Lady’s Manor Timber Stakes and won by 5 1/4 lengths under Chris Gracie. The result gave Armata Stables, a partnership between Ben Griswold IV and Perry Bolton, their first wins in this timber stakes. Vintage Vinnie’s season only became more impressive when he attempted his first Maryland Hunt Cup two weeks later. This time piloted by jockey Dan Nevin, the pair went wire-to-wire to win by an astounding 112 1/2 lengths, and ran the four mile race in the fastest time in history. This was trainer Joe Davies’ fifth straight Hunt Cup victory, having trained Senior Senator to win it three times and Derwins Prospector once. Jockey Dan Nevin arrived in Ireland just a few days before the race and had never ridden over timber. The victories in the Manor and the Hunt Cup, which are sanctioned races under the National Steeplechase Association, gave Vintage Vinnie the points to be the Maryland Governor’s Cup Horse of the Year. 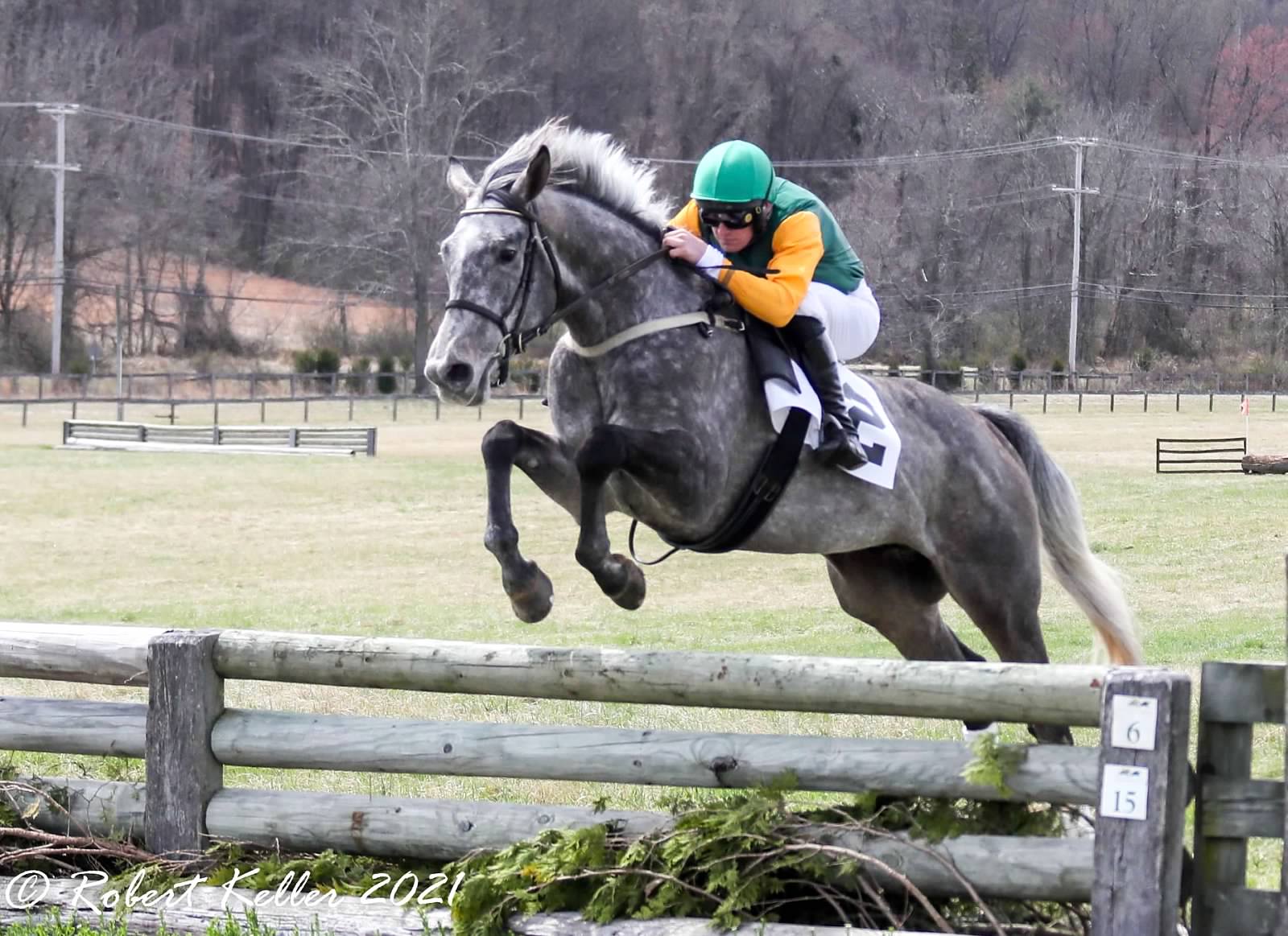 Road To Oz, a 6-year-old gray gelding owned by Holwood Stable, was a newcomer to timber this year after having run over hurdles last year for trainer Mark Beecher. He made his first start in the Novice Timber at the Green Spring Valley Point-to-Point where he won under jockey Graham Watters. Graham Watters had the ride back two weeks later in the Maiden Timber at the My Lady’s Manor, where Road To Oz scored his second victory of the season and officially broke his maiden by 5 1/4 lengths. Road To Oz, who was bred in Maryland by R. Larry Johnson, is also one of the recipients of the $500 MHBA Maryland-Bred bonus.

$500 MHBA Maryland-Bred Bonus Winner: Road To Oz and Include It

Include It, a six-year-old gelding bred by Fitzhugh, LLC, tried timber for the first time this year with great success. After running on the flat and then trying hurdles for owner Riverdee Stable and trainer Todd Wyatt, Include It made his timber debut in Virginia in March. He was second there before running at the Elkridge Harford Point-to-Point where he won the Novice Timber under Eddie Keating. Eddie Keating had the ride again in the Apprentice Timber at the Grand National where Include It scored his second victory of the season and officially broke his maiden over timber. The pair continued to have success after running twice in Maryland, winning the Apprentice Timber at the Willowdale Steeplechase in May.

Master Seville, a 5-year-old gelding owned by South Branch Equine LLC, had never run in a race prior to this year. He made two starts over timber at Virginia point-to-points before going to the Maiden Timber at Winterthur in Delaware. He only ran once in Maryland, at the Potomac Hunt Races, where he won the Novice Timber by eight lengths for jockey Sean McDermott and trainer Mark Beecher. Master Seville is by Seville (GER) out of Casablanca Lily (IRE) and was bred by South Branch Equine LLC.

Flash Jackson and Chris Gracie teamed up for two runs in Maryland this season, finishing second both times. Flash Jackson, a 7-year-old gelding owned and bred in Maryland by Ann Jackson, tried a few seasons over hurdles before transitioning to timber last year. He was second in his first start over timber at the Middleburg Spring Races in June 2020 and came back to win over the same course at the Virginia Fall Races in October. Michael Mitchell had the ride both times. This year, Chris Gracie, a seasoned timber jockey, teamed up with Flash Jackson first at the Elkridge Harford Point-to-Point, finishing second behind Zanjabeel. The duo finished another close second in the Apprentice Timber at the My Lady’s Manor. Todd Wyatt has trained Flash Jackson for his whole jump racing career.

Goodoldtimes is another horse owned by Armata Stables. The 7-year-old gelding broke his maiden in 2019 for Meadow Run Farm and trainer Leslie Young, did not run in 2020, but returned this year for trainer Alicia Murphy. After competing in the Foxhall Teamchase, Goodoldtimes went to the Green Spring Valley Point-to-Point where he won the Heavyweight Timber by a neck under Eddie Keating. This was his only run in Maryland that counted for the Heavyweight Timber Champion Award, but he also ran in the Apprentice Timber at the My Lady’s Manor, finishing third.

Armata Stables’ star this year was Vintage Vinnie, winner of the My Lady’s Manor Timber Stakes and the Maryland Hunt Cup. Goodoldtimes was their only other winner in Maryland this season but they also had You’re No Better, Pincer Movement, Joshua G, Some Response, and Highway Prince for a total of three wins, three seconds, and two thirds. Ben Griswold IV and Perry Bolton are co-owners of the horses run in Armata Stables’ silks.

Mark Beecher began training a few horses while still competing as jockey in 2015. His stable continued to grow over the next few years and in 2019, after winning the Pennsylvania Hunt Cup on Mystic Strike, he retired from riding and turned his attention to training. Assisted by his wife Rebecca, Mark Beecher ran eight horses at different race meets in Maryland this spring. The list includes Road To Oz, this year’s Novice Timber Champion; Master Seville, the $500 Maryland-Million Sired Bonus Winner; and Rocket Star Red, who finished third in the Maryland Hunt Cup under Brett Owings as well as second in the Heavyweight Timber at the Green Spring Valley Point-to-Point and in the Allowance Timber at the Grand National. Worzel Gummidge, Cracker Factory, and Fused also won in Maryland under Mark Beecher’s name. 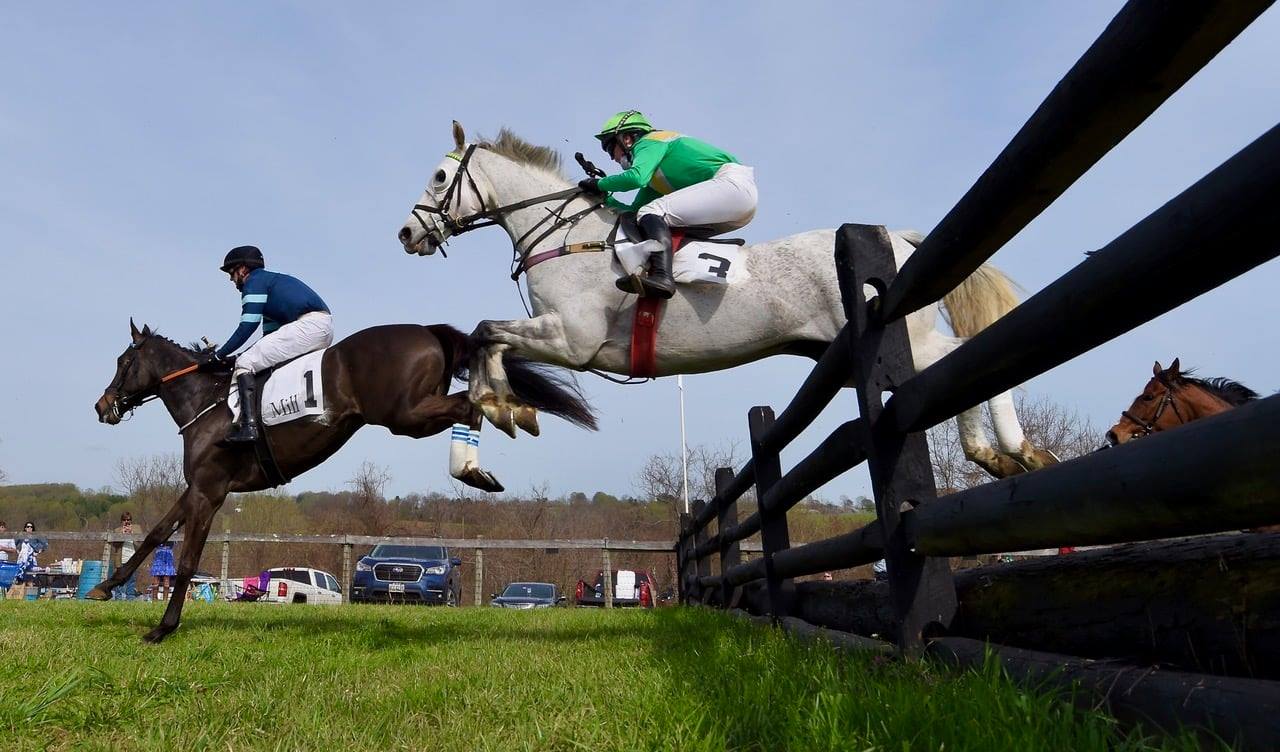 Skylar McKenna and Super Saturday in the Apprentice Timber at the My Lady’s Manor. Douglas Lees photo

Skylar McKenna competed in all three of Maryland’s big timber meets: the My Lady’s Manor, the Grand National, and the Maryland Hunt Cup. She started her season at the Elkridge Harford Point-to-Point on veteran timber horse Joshua G, owned by Armata Stables and trained by her mom Kathy Neilson. From there Joshua G went to the Allowance Timber at the Grand National and then the Maryland Hunt Cup. Skylar McKenna’s points came from a win in the Apprentice Timber at the My Lady’s Manor on Irv Naylor’s Super Saturday, another veteran timber horse trained by Kathy Neilson. She was also second in the Grand National Timber Stakes on Charles Fenwick Jr.’s Royal Ruse, trained by her aunt, Sanna Neilson. 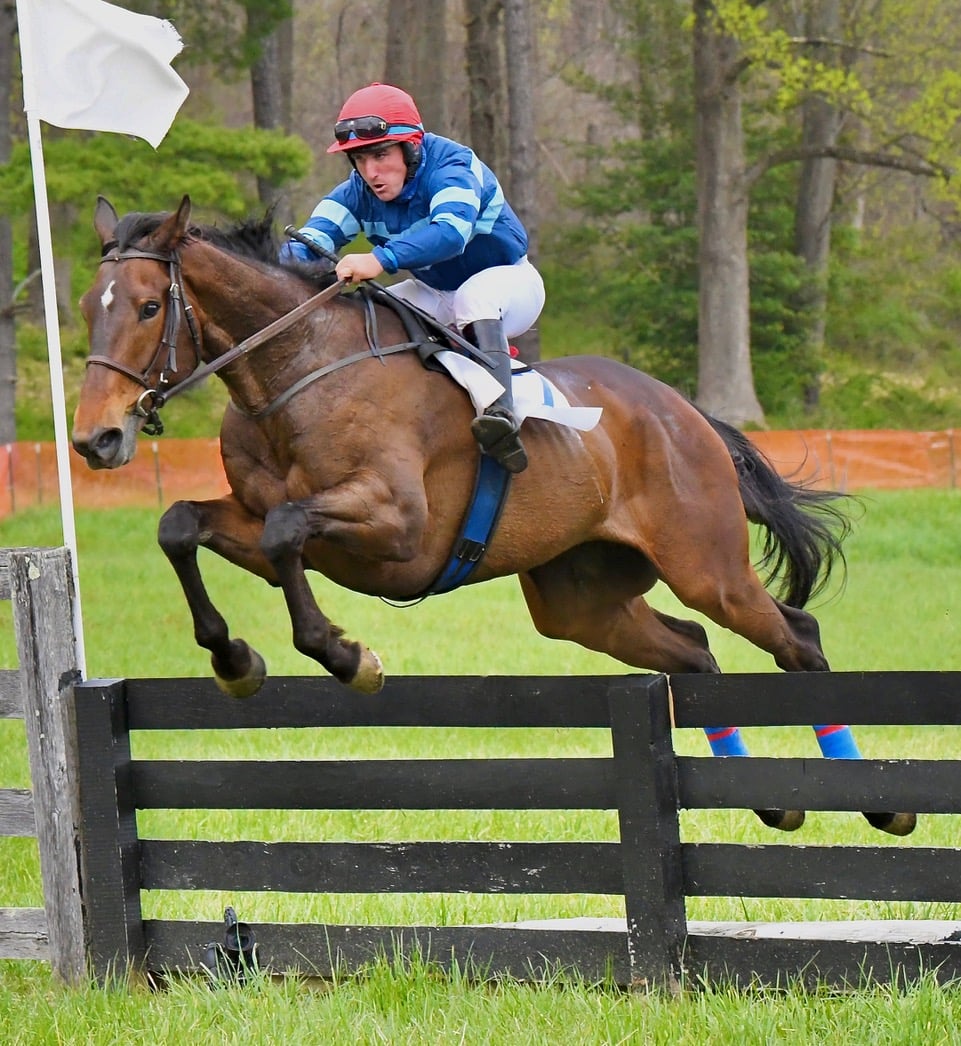 Eddie Keating and Include It on their way to winning the Apprentice Timber at the Grand National. Douglas Lees photo

Eddie Keating dominated the rider awards this year with an impressive record of 17 starts, 9 wins, 1 second, and 3 thirds. This is a 53% win percentage and 76% in the money finishes. Three of the nine victories were sanctioned under the National Steeplechase Association. Highlights from Eddie Keating’s season included a four-win day at the Elkridge Harford Point-to-Point. He rode Stand Down to win the Open Timber, Include It to win the Novice Timber, Zanjabeel to win the Apprentice Timber, and Withoutdestination to win the Amateur Flat. His win on Transit in the Amateur Flat at the Potomac Hunt Races gave him the points to win the Voss Amateur Flat Series. Eddie Keating also scored a double at the Grand National when he won the Allowance Timber on Awesome Adrian and the Apprentice Timber on Include It. He rode winners for seven different trainers and currently sits third in the National Steeplechase Association jockey standings with seven sanctioned wins. 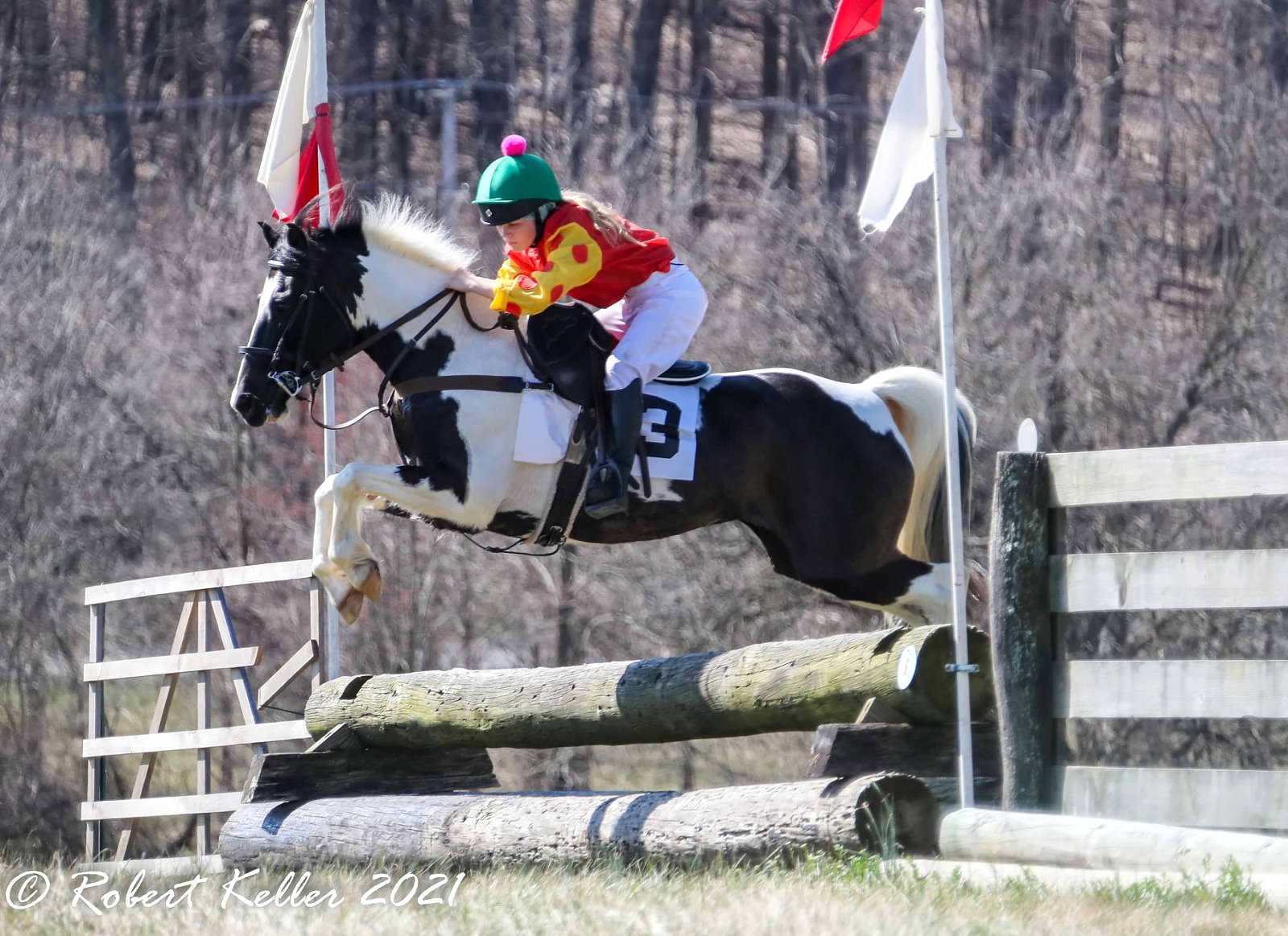 Carly Kern competed on a small, medium, and large pony this season to give her the title of Overall Leading Pony Rider. From seven rides Carly Kern had five wins and two seconds. Two victories were on small pony Mallory, and three wins were on medium pony Jigsaw. The three victories on Jigsaw at the Green Spring Valley Point-to-Point, Elkridge Harford Point-to-Point, and Potomac Hunt Races also gave her the title of Leading Junior Medium Pony Rider. Carly Kern also rode a thoroughbred, All The Way Jose, to two second place finishes in the Junior Field Masters Chases. 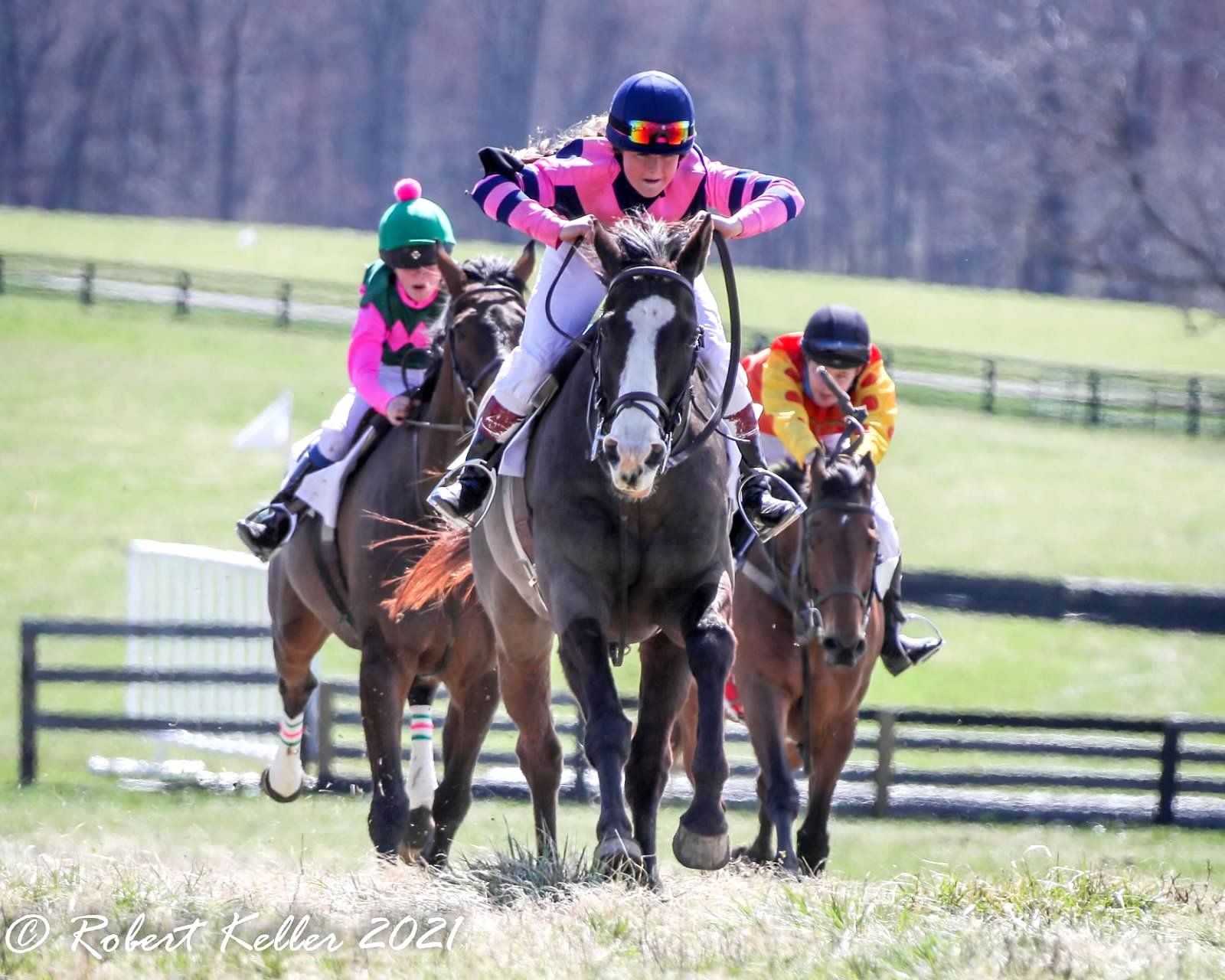 Jaidyn Shore and Grandiflora on their way to winning at the Elkridge Harford Point-to-Point. Robert Keller photo

The winners of the Jonathan Kiser Memorial Scholarship and the Junior Foxchasing Scholarships will be announced at the Awards Reception.

The evening will feature a Sam Robinson Art Show, with 50% of the sales benefiting the Kiser Fund, the Equine Rescue Ambulance, and the Maryland Horse Library and Education Center.

For more information on the annual Awards Reception and to purchase tickets, click here.