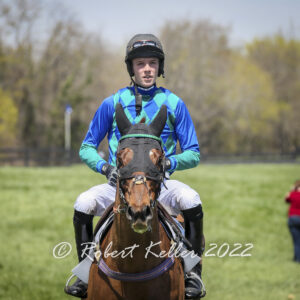 Leipers Fork Steeplechasers Tomgarrow (IRE) is in the lead for Maryland Governor’s Cup Horse of the Year with 8 points, saddling up only for the Foxhall Farm Team Chase and My Lady’s Manor. Trained by Leslie Young with Freddie Proctor in the irons. Photo by Bob Keller

We are now more than half way through the season, with only three races left in the 2022 Maryland Governor’s Cup Series: The Grand National, The Maryland Hunt Cup and the Potomac Races.

For the Maryland Governor’s Timber Horse of the Year, Leipers Fork Steeplechasers Tomgarrow (IRE) is in the lead with 8 points, saddling up only for the Foxhall Farm Team Chase and the My Lady’s Manor. However, Storm Team, Include It, and Bowled Over each have six points and could easily outstrip Tomgarrow, depending upon how things go in the next three meets.

While quite often the Governor’s Cup Horse of the Year can be predictable, rarely is that so for the Novice Timber Horse of the Year. Currently in the lead in the standings is Mrs. Johnston’s Lost Story with 11 points, followed by Northwood Stable’s and Sheila Williams’ Notjudginjustsayin with 9 points. Neither are entered in tomorrow’s maiden timber at the Grand National, but Boutonniere, and Chosen Mate (each with 6 points) are – and a win for either will catapult them to the lead with 14 points. 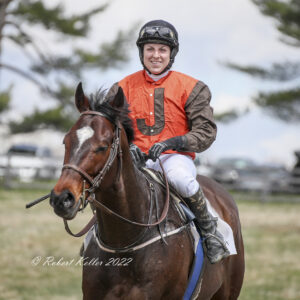 It was a match race between Profiteer and Lost Story until Profiteer lost his rider (Eric Poretz) at the third fence and Mrs. S. K. Johnston’s Lost Story, ridden by Elizabeth Scully, were left to complete the course on their own. The victory, along with their second place finish in the Manor’s Amateur Maiden Timber, puts Lost Story in the lead for Novice Timber Horse of the Year, which comes with a nice $1,000 bonus for the owner. Bob Keller photo

The field for the Amateur Apprentice Timber Horse & Rider is tightly bunched and could be anyone, but only Colin Smith on Bowled Over are entered in tomorrow’s Western Run Plate at the Grand National.

For overall leading rider, it is the MSA’s own staffer, Elizabeth Scully running neck and neck with Teddy Davies, each with 27 points.

And if you are attending the Grand National, be sure to stop by the tailgate hosted by our presenting sponsor, MidAtlantic Farm Credit, to meet new loan officers Ellie Grossnickle and Meg Millison.

Click here for the standings for MSA’s new Maryland Irish Thoroughbred Horse of the Year award!