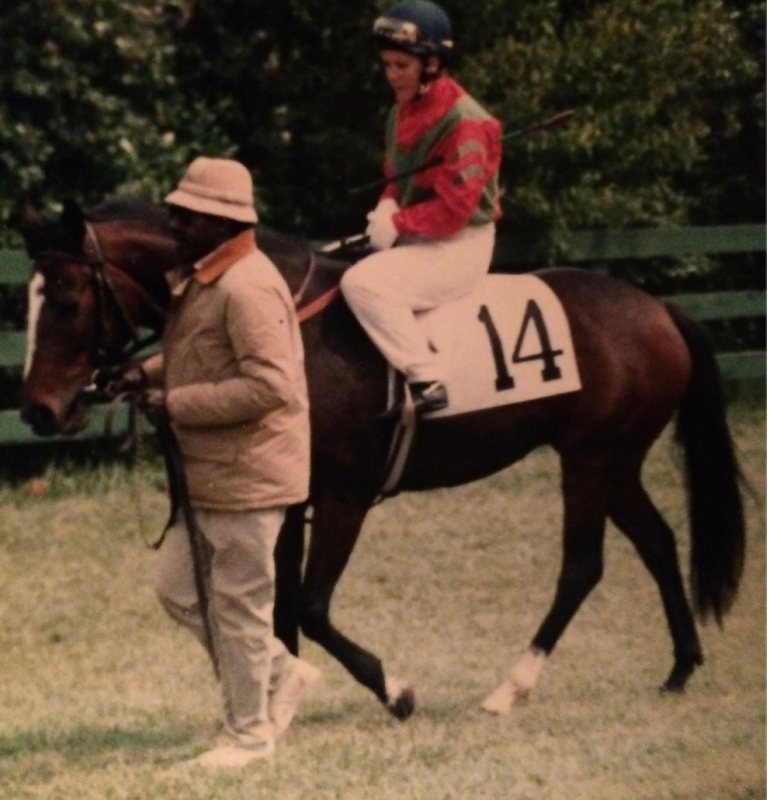 Maryland Steeplechasing lost a racing legend this past winter.  Read Joe Clancy’s remembrance of James “Speedy” Kiniel below.  Speedy was a long time assistant to champion steeplechase trainer D.M. “Mikey” Smithwick and taught many current trainers, including Billy Meister and Jack Fisher, a thing or two during his years with Smithwick.

Remembering Speedy, and all those like him
by: Joe Clancy, MidAtlantic TB

Speedy Kiniel died. And dozens of people connected to Maryland racing and steeplechasing and racehorses in general thought about the old days. Maybe they also remembered Lonnie, Shorty, Shaky, Spoon, Crazy Sam, Chubby, Bubba, Monroe, Hume, Jerome, Cornbread and all the other grooms of various eras and locations.

You know the guys. They worked in the barns for what seemed like decades. All day. They rubbed, walked, ran, talked and breathed racehorses. They lived in the bunkhouses, ate in the track kitchens, rode in horse vans. Some, like Kiniel (whose real name was James) wound up working on farms and stepping into a more mainstream life–a little–but they still got up every day and went to bed every night thinking about horses.

When he died, Kiniel’s name wound up on a list of obituaries for this magazine. Of course, we didn’t get much further than his name. He didn’t leave much in the way of details. He was from North Carolina, came to Maryland with his brother and by the sounds of things never left. He gravitated toward Mikey Smithwick’s farm in Hydes, found a home, stayed, became a fixture.

Kiniel was 75 when he died and some pegged his tenure with Smithwick at 50 years. When he wasn’t in the barn, he was part of a band, Fat Boy and the Comets (later dubbed The Soulations) that recorded two singles and played for 20 years in the region. In 2011, he sang in a Senior Idol competition. Kiniel had style–whether he was wearing shades in the winner’s circle or a suit on stage.

In his time with Smithwick, he touched some horses. Champions, legends, heroes. His boss went to the Hall of Fame. Kiniel kept taking care of horses. Nobody did it better than he did.

And the work rubbed off on more than horses.

Kiniel was a groom, a trainer, a family member, a mentor to the people at the Smithwick farm. Lessons learned went a long way toward keeping people in racing, and that’s the true impact of men like Kiniel and other grooms of that era.

They worked hard for other people, at a difficult job, for not much money. In turn, they brought an honor to the task and made it something people wanted to do.

Home from college for the summer? Stuck between “real” jobs? Really want to be a trainer, but don’t now where to start? Tag along with Speedy or Lonnie or Bubba at the track or around the farm, get a couple of horses to rub, hook those safety pins in your jeans just so, stick a rub rag in your pocket, get to work early, ride the van to Atlantic City at night and do it all over again the next day. It was hard work, but it mattered more than cutting lawns or washing cars or flipping burgers.

And, who knows? You just might make something of yourself.

And I guess that’s the point. These men provided a service, without really knowing it. They were working. Everyone else learning. Only some of the lessons had anything to do with horses.

“Believe it or not, right up to the present day, whenever I see a horse walking all over his handler or spinning round and round stepping on himself, I think of Speedy,” said Maryland horseman Turney McKnight, who spent plenty of time in the Smithwick barn, via an email. “He wrote the book on what to do to keep that from happening. Awesome horseman with a good measure of natural dignity and charm thrown in.”

Like McKnight, everybody who knew Kiniel has a story. It might involve Lady of Leys, a Pennsylvania-bred stakes winner, or steeplechase champion Straight and True, or three-time Iroquois Steeplechase winner Uncle Edwin, or gritty mare Fight Talk (who seemed to always get close, without winning). Regardless of who they were, the horses and the people were a huge part of Kiniel’s life–and he theirs.

He’ll be missed, but the lessons live on.