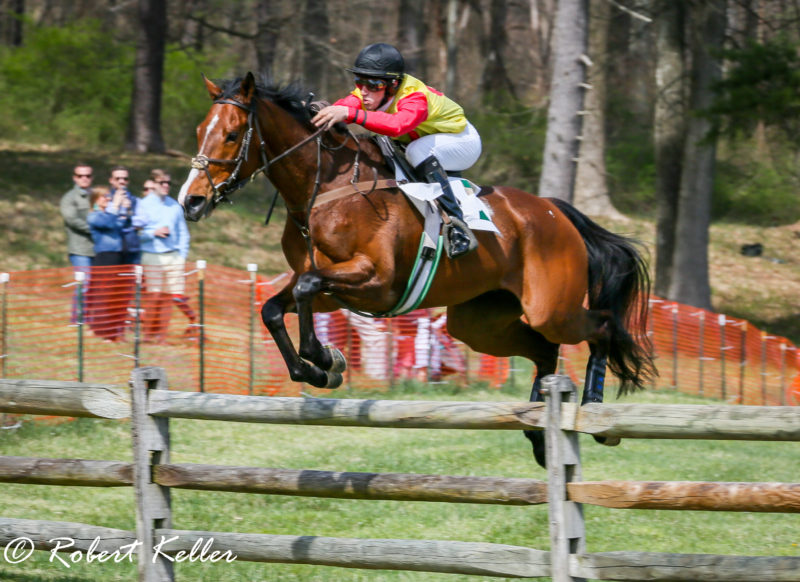 There was lots of excitement in Butler, Md. this past Saturday, April 20th, as trainer Joe Davies swept the card at the Grand National Steeplechase. The exclusively timber hunt meet carded a total of three races for amateur jockeys only. Davies had seven entries on the day, highlighted by the winning the feature timber stake with Skip Crawford’s Senior Senator, who emerged victorious over Raven’s Choice by a margin of 1 ½ lengths. Senior Senator also won the Grand National in 2017 and is entered to run in the Maryland Hunt Cup this coming Saturday, which he also won in 2016. Eric Poretz was in the irons for all three of the Davies-trained victories at the Grand National, which also included wins with Sportsmans Hall’s Hill Tie and Frank Bonsal’s Stand Down. Poretz was introduced to Davies in 2011 while on the NSF Developing Rider Steeplechase Camp and the rest is history!

Skylar McKenna aboard It’s Nothing on their way to victory in the Junior Field Master’s Chase at the Grand National Steeplechase.

Not to be shadowed by the sanctioned races, the Grand National also hosted three races for junior jockeys. A total of 19 horses and ponies ridden by juniors filled the fields of three junior field master’s chases prior to the start of the first sanctioned race. You can find results of the junior races here. Several of these budding jockeys could also be found at the end of a shank leading up sanctioned entries to the paddock shortly after they rode their race.

The Maryland sanctioned amateur timber racing circuit culminates this Saturday with the 122nd running of Maryland Hunt Cup. Entries show the 4-mile race attracting a field of 10 runners, only three of which are making their first start over the course. Racing fans should be aware that tickets are not sold on the day and can only be purchased at ticket outlets at this point, which are found on the Maryland Hunt Cup website.   You can read about the excitement waiting to unfold on Saturday in Past winners to clash in $100,000 Maryland Hunt Cup.  At the time of posting, there was one scratch, Jeffery G.

Maryland Hunt Cup momentum keeps going the following day, April 29th, at Shawan Downs, where future timber racing stars get their time in the limelight at the Maryland Junior Hunt Cup. Post time for first race is 12 Noon for the all-junior day of racing. Entries for the day can be found on the Central Entry Office website and additional details about the races can be found here.  Come out and support the next generation of racing!