The perfect spring weather continued for the second point-to-point of the MSA Governor’s Cup Series on Saturday, April 3. Four timber races, two flat races, and several junior races were on the card at the Elkridge Harford Point-to-Point in Monkton, Maryland. Held at the Voss’ Atlanta Hall Farm, this weekend once again welcomed a limited number of spectators. 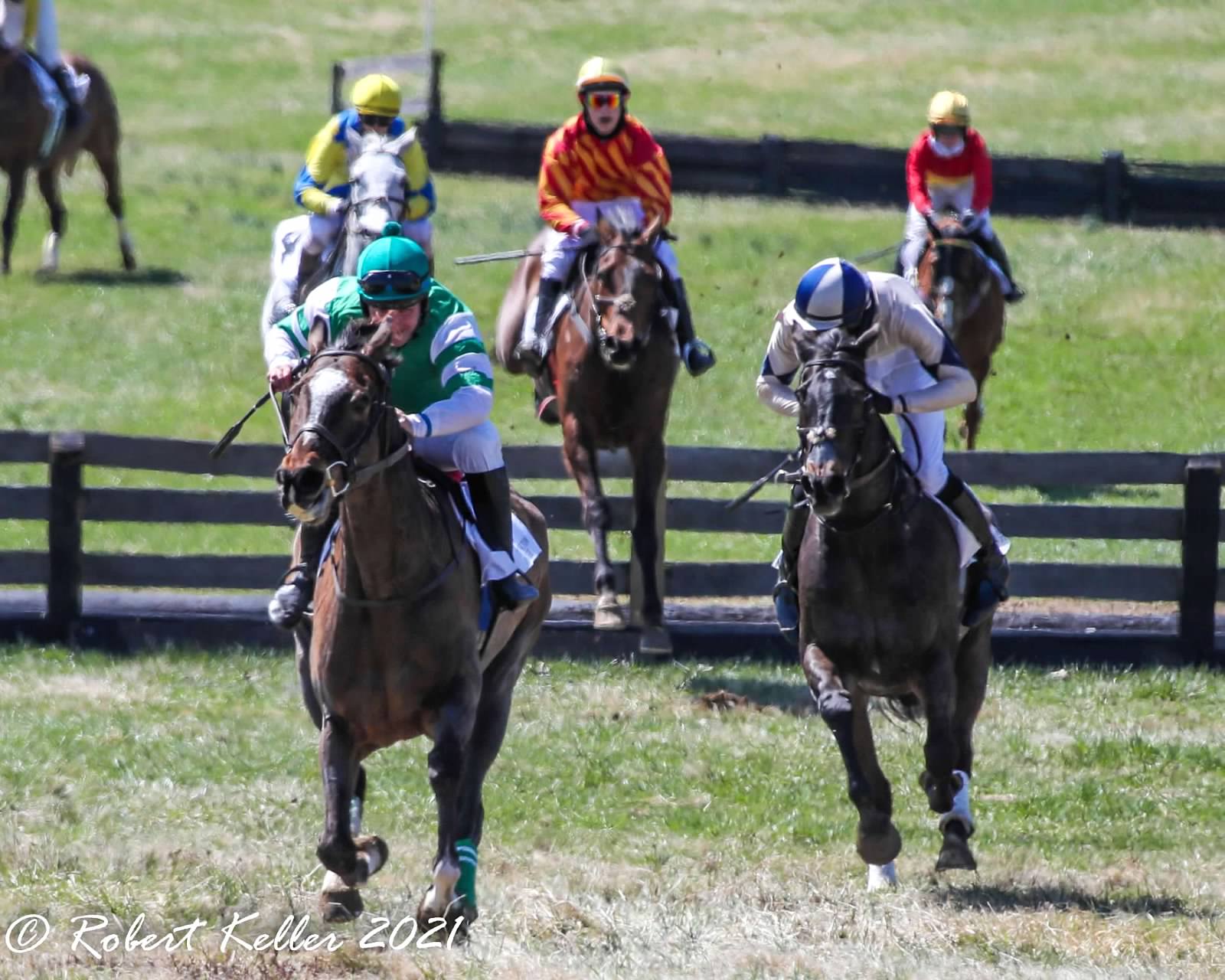 Frank A. Bonsal, Jr.’s Stand Down and Eddie Keating pull away from the field after the last fence. Robert Keller photo

The first timber race of the day, the Edward S. Voss Memorial Open Timber, was a competitive six horse field, won by Frank A. Bonsal, Jr.’s Stand Down. Stand Down, who came off of a victory at the Warrenton Point-to-Point just a week before, was trained by Casey Pinkard Savin and ridden by Eddie Keating. This would be the first of four victories for Keating. The field raced together for most of the race but Stand Down produced the most speed when it counted. The other entries in the race, Just Wait and See, Hill Tie, Naturally Won, Joshua G, and Daddy in the Dark, have all been nominated for the Maryland Hunt Cup. 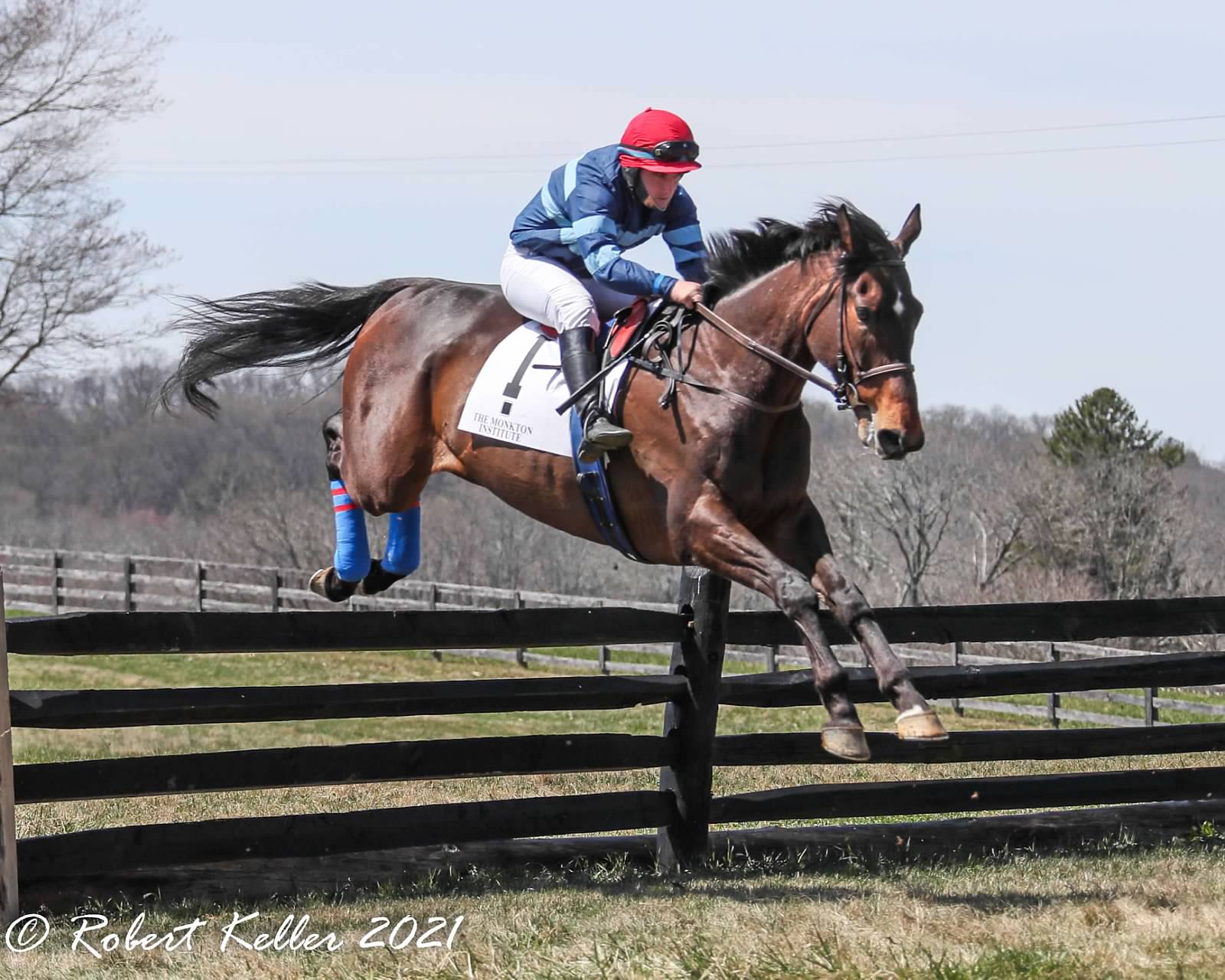 Eddie Keating and Riverdee Stable’s Include It. Robert Keller photo

The George C. Clement Memorial Novice Timber was Keating’s second victory, this time on Riverdee Stable’s Include It. Todd J. Wyatt trained the winner. The Novice Timber was a three horse race, led by Irvin S. Naylor’s Indian Hawk and jockey McLane Hendriks. Include It followed closely in second, with Todd Wyatt’s other entry, Macue, in third. The three horses jumped the second last fence together, but Include It took the lead before the last and drew away to win by twelve lengths. 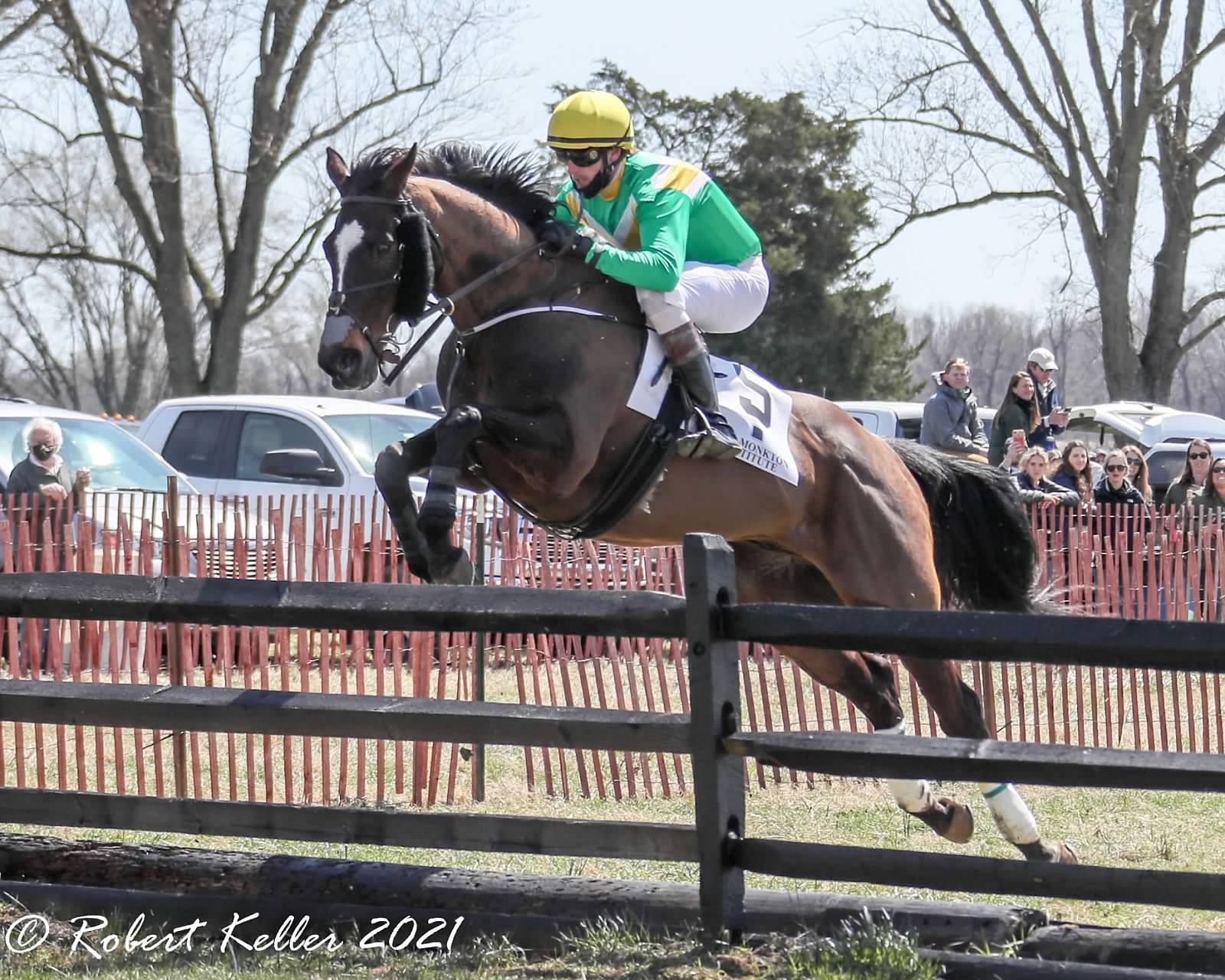 The Ann L. McIntosh Memorial Heavyweight Timber was next on the card and was won by Irvin S. Naylor’s Hooded. Hooded, another Maryland Hunt Cup nominee, was trained by Cyril Murphy and ridden by McLane Hendriks. In a similar style to the previous race, Hooded sat second behind the pacesetter Tesoro, jumped the second last alongside Tesoro and Hafajay, but took the lead over the last fence and won handily. 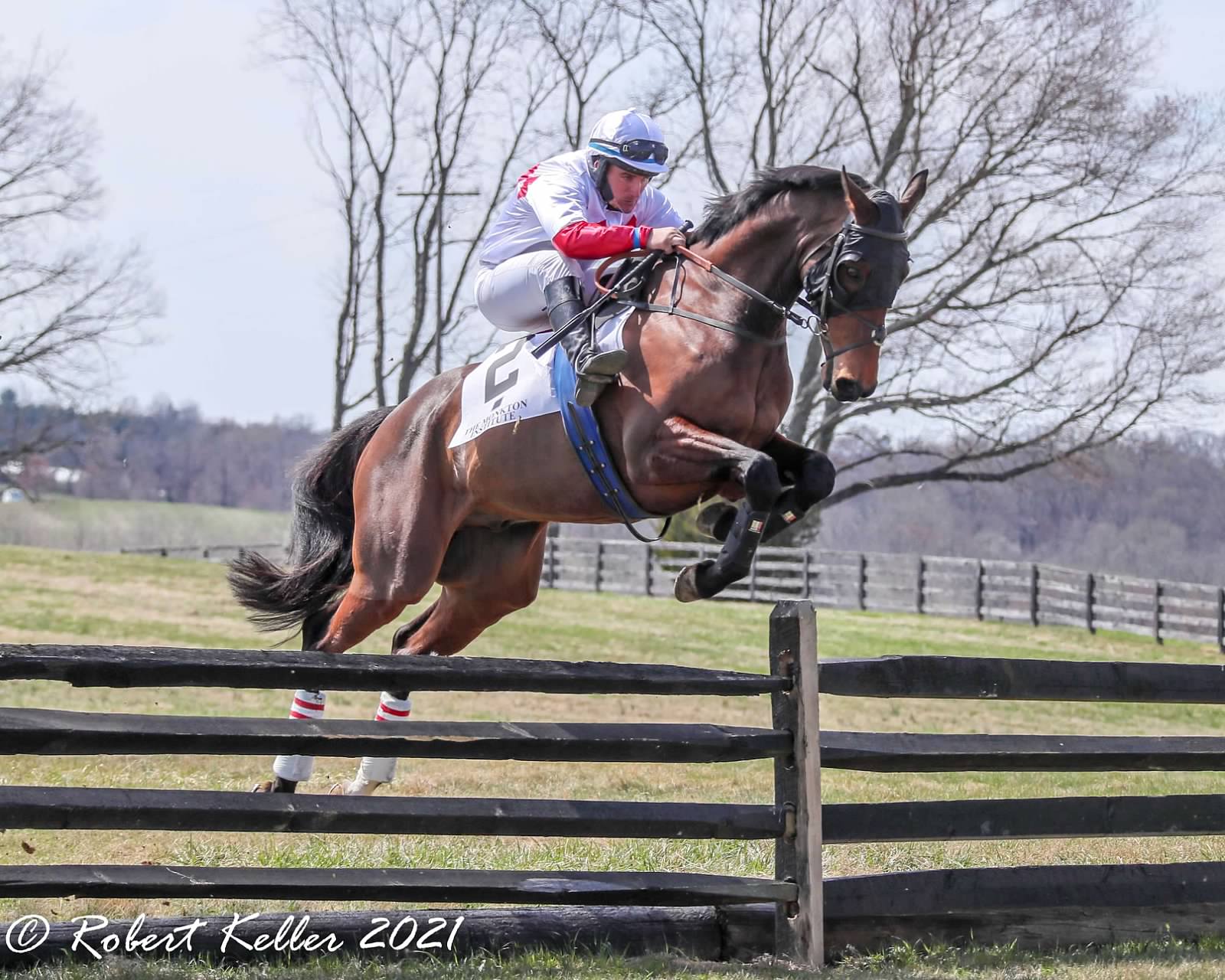 The last timber race of the day was the Leith Symington Griswold Amateur Apprentice Timber, which scratched down to two horses. Keating scored his third victory when he won by three lengths on Meadow Run Farm’s Zanjabeel, now trained by Stephanie Moore. Ann Jackson’s Flash Jackson, ridden by Chris Gracie, set the pace with Zanjabeel close behind until Keating sent him to the lead before the last fence. This was Zanjabeel’s first start over timber, but prior to this he was the 2018 Eclipse Award recipient for Champion Steeplechase Horse. His 2018 hurdle campaign included a win in the Grade 1 Calvin Houghland Iroquois Stakes at Nashville and a win in the Grade 1 Lonesome Glory Handicap at Belmont Park. 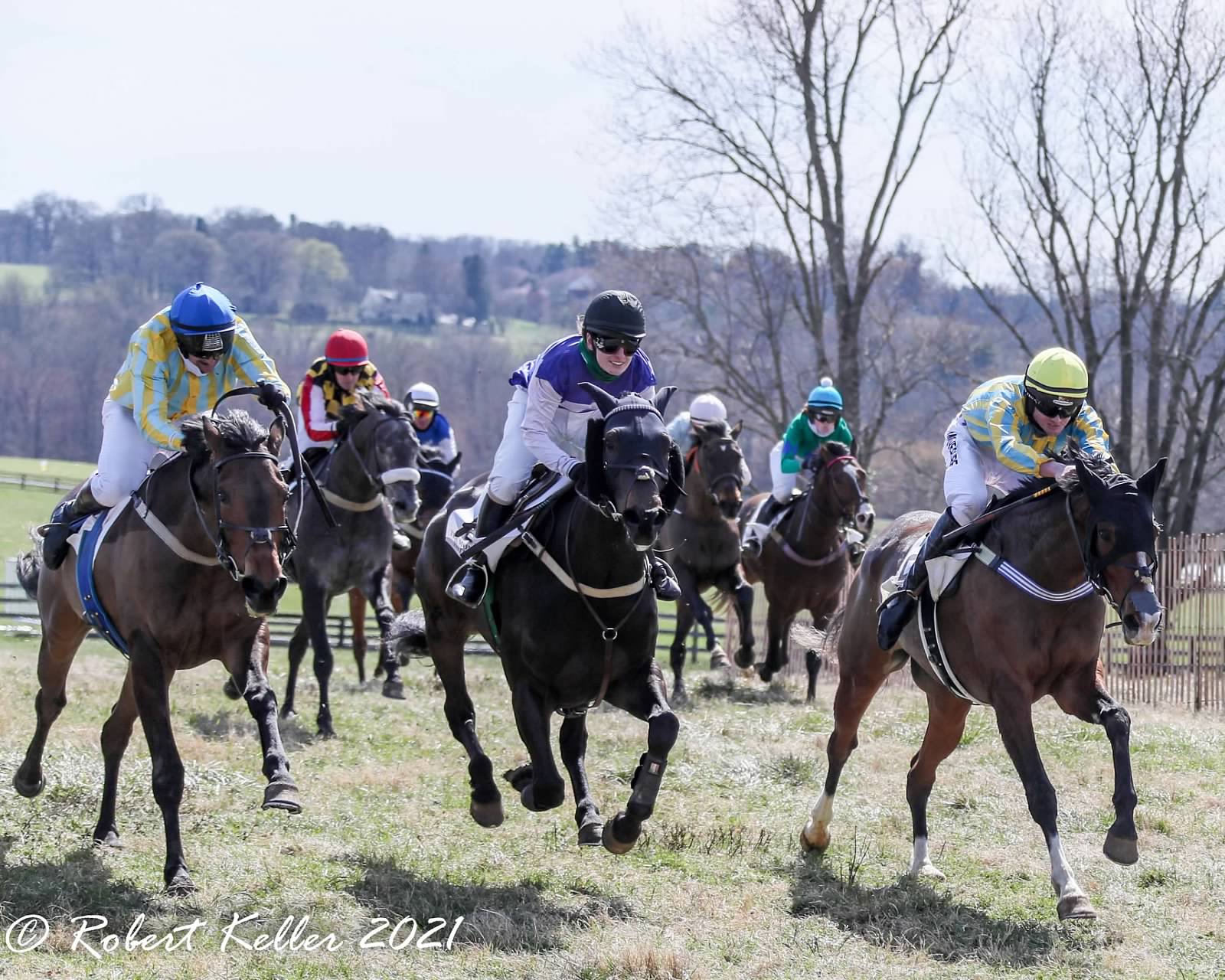 The day concluded with two flat races, starting with the Alfred J. Smithwick Memorial Open Flat. Alexandra S. White owned and trained the winner, Dancing Til Dusk, and also trained the second place horse, Vesper. Apprentice jockey Colin Smith rode the winner. Dancing Til Dusk raced mid-pack and just made it up in time to win by head over Vesper and Sollozzo.

The last race of the day, the Sara Bosley Secor Memorial Amateur Flat, gave Keating his fourth win of the day. Charles C. Fenwick, Jr.’s Withoutdestination was trained by Todd J. Wyatt. Withoutdestination saved ground on the inside throughout the race and drew away to win handily in the stretch. 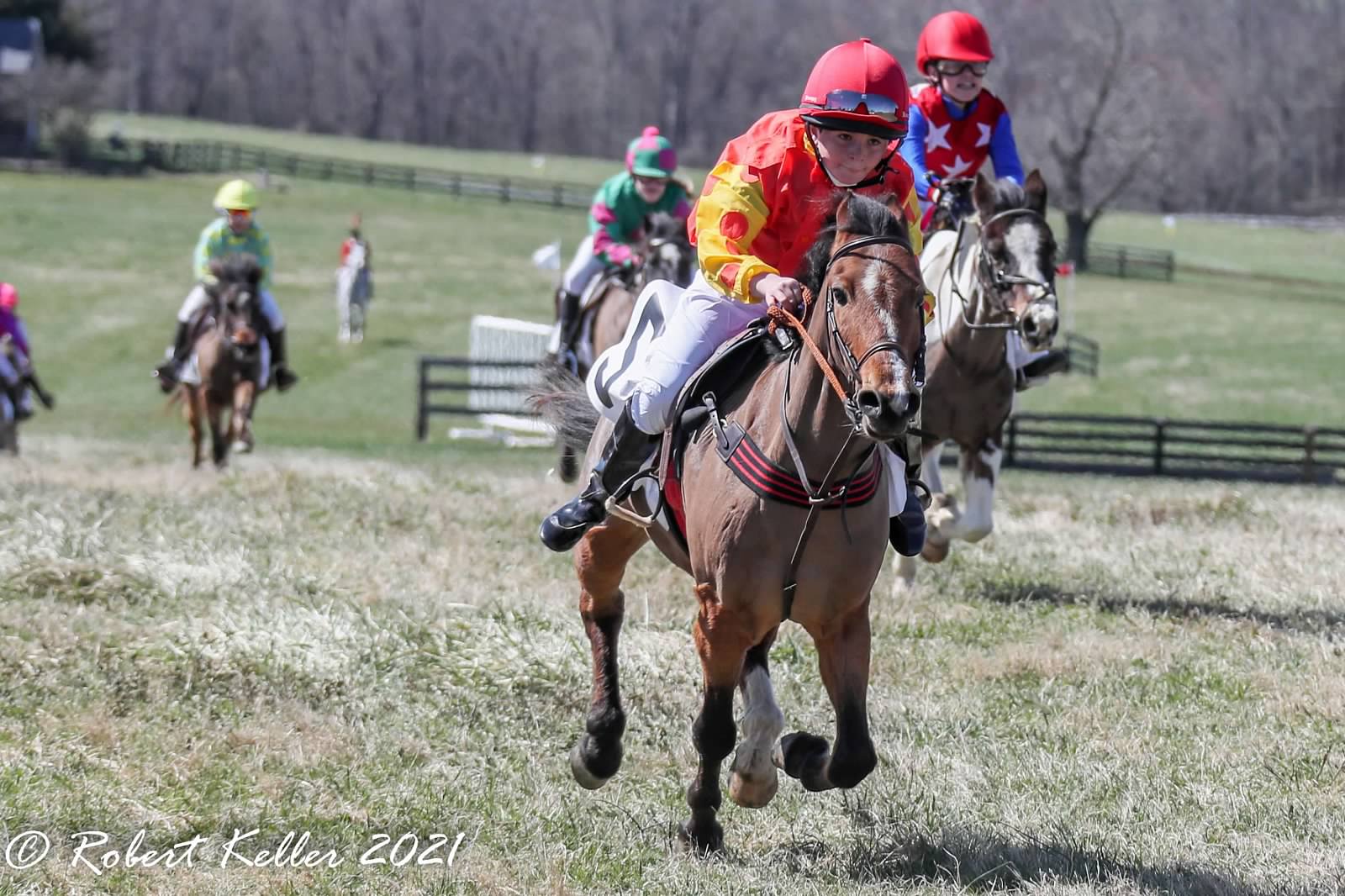 There was also a full card of junior flat and field master’s chases, in which the results were almost identical as they were the week before at the Green Spring Valley Point-to-Point. William Slater won the Small Pony Flat Race and the small pony division of the Junior Field Masters Chase on Hoof Hearted and Chewy, respectively. Cassidy Cessna picked up her second consecutive win on Charleston in the Medium Pony Flat Race as did Thomas Houghton on Charmed in the Large Pony Flat Race. Carly Kern won the medium pony division of the Junior Field Masters Chase on Jigsaw, and Jaidyn Shore won the large pony division on Balls to the Walls. Jaidyn Shore also won the horse division on Ann W. Merryman’s Grandiflora.

To see all of Robert Keller’s photos from the day, click here.

Racing returns to Monkton with the My Lady’s Manor on Saturday, April 10. Four timber races, including the My Lady’s Manor timber stakes, two maiden races, and an amateur apprentice race, are on the card. This meet also marks the first meet of the season run under National Steeplechase Association rules. Entries can be found here.