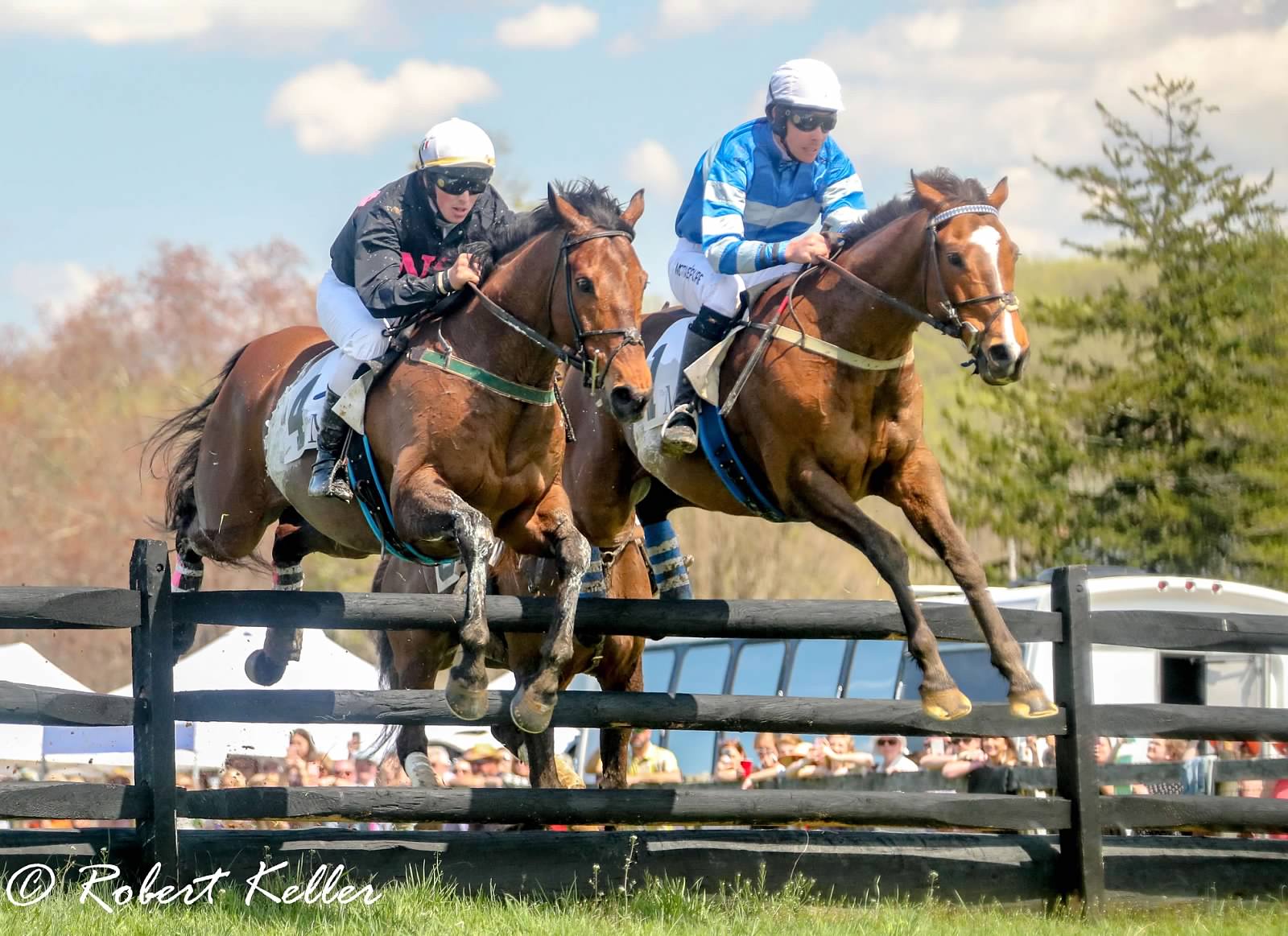 Doc Cebu (L) and Mystic Strike (R) ran close together throughout the race.

The My Lady’s Manor Steeplechase Races were run on Saturday, April 13, a warm, sunny day in Monkton. The day kicked off with Leadline Trot Races before four exciting timber races were underway.

Upland Partners’ Mystic Strike came off of a win in the Open Timber at the Green Spring Valley Point-to-Point to win the $50,000 Timber Stakes over Blair W. Wyatt’s Witor. Mystic Strike, trained by Todd McKenna and ridden by Mark Beecher, was kept within striking distance throughout the race, moved to the inside path approaching the final fences, and took advantage of a mistake by Doc Cebu. The reigning National Steeplechase Association timber champion met the second to last fence awkwardly and lost his rider, leaving the race open for Witor, Lemony Bay, and Mystic Strike. Mystic Strike gained the lead in the stretch and held off Witor to win by 1 1/4 lengths. This win also puts him on top of the standings for the MSA Horse of the Year. 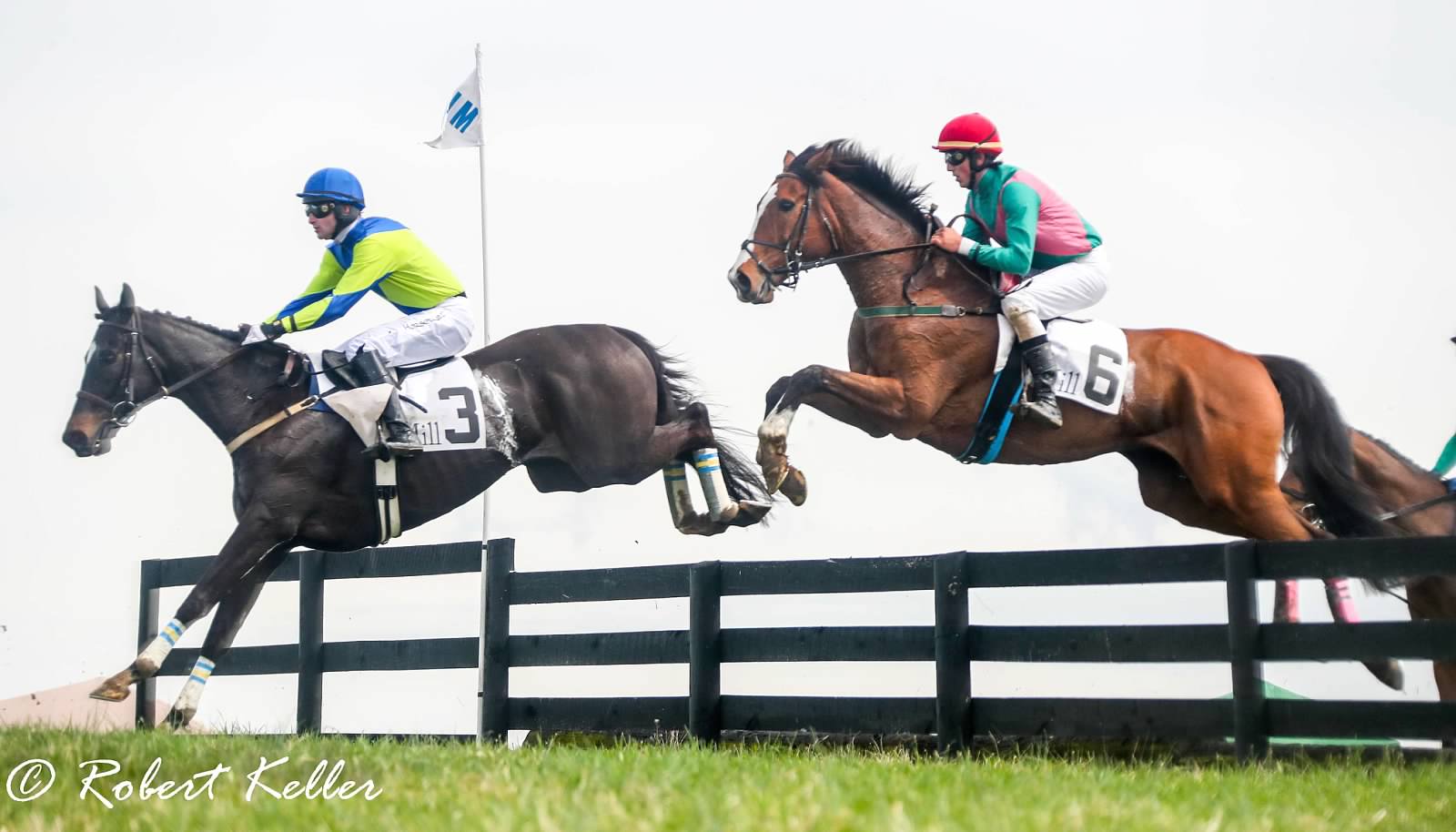 Schoodic and Hadden Frost jump a fence after Satish and Aaron Sinnott. Schoodic ultimately beat Satish by a head, the closest finish of the day.

Jack Fisher (trainer) and Hadden Frost (jockey) came back from their loss with Doc Cebu to win the John Rush Streett Memorial and the Thomas H. Voss Menorial, both maiden timber races. Frost rode Mrs. John R. S. Fisher’s Schoodic to win by a head over Bruton Street-US owned Satish. This was the nine-year old’s timber debut but he was a seasoned hurdle horse, running regularly in stakes races; in 2017 he won the Grade 2 David Semmes Memorial Stakes at the Virginia Gold Cup. 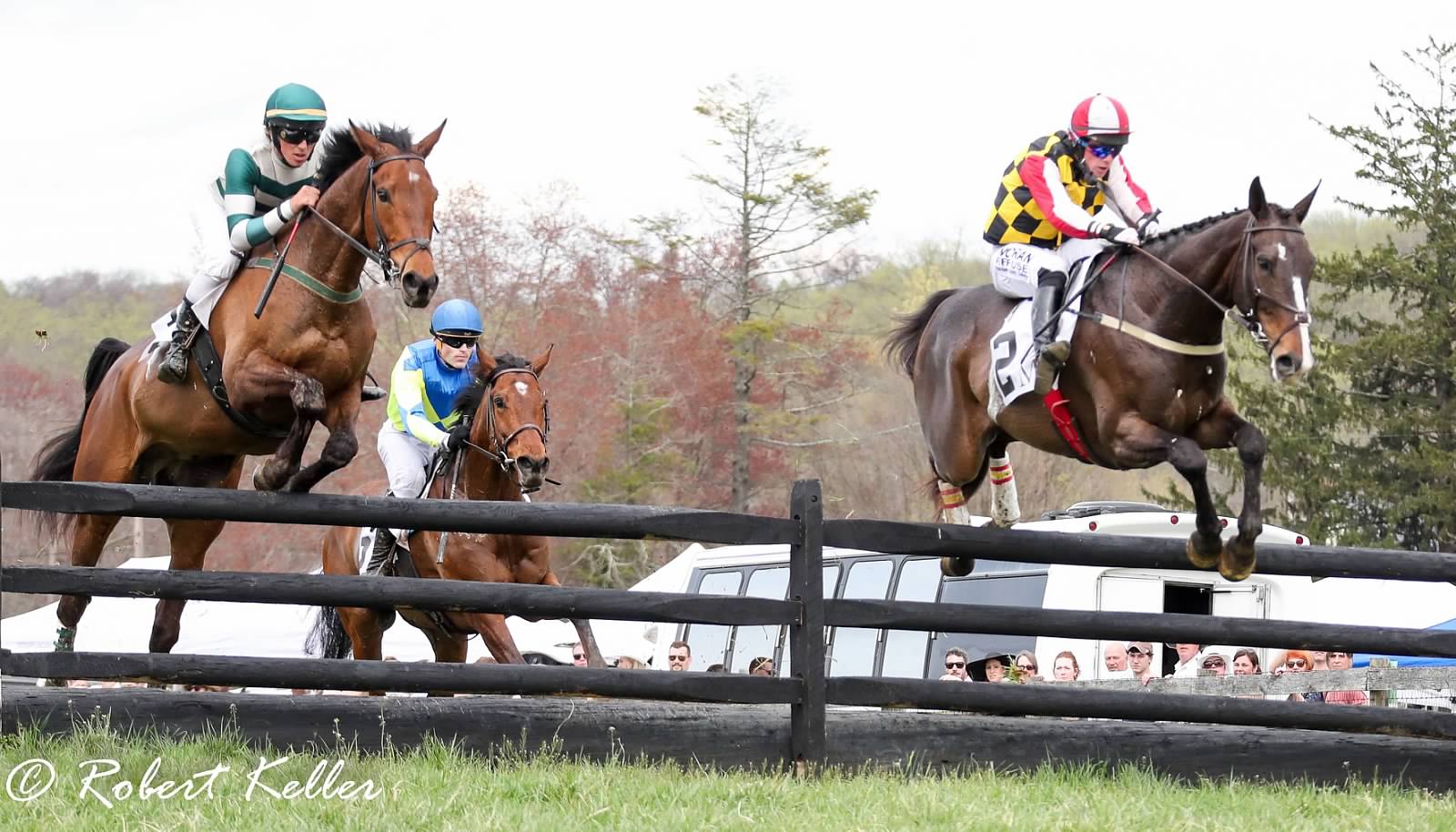 Fisher and Frost teamed up to take home a win with another maiden, Hyggelig Haven LLC’s Political Theatre. The Irish-bred ran over timber in 2018 and used the Green Spring Valley Point-to-Point as a tune-up for his 2019 campaign. Frost rode Political Theatre to win the Novice Timber at the point-to-point.

Prime Prospector and Paul O’Neill clear a fence on their way to winning the John D. Shapiro Memorial.

The final race of the day, the John D. Schapiro Memorial, was won by Peter A. Jay’s Prime Prospector. This race is restricted to amateur apprentice riders; Paul O’Neill had the ride for trainer Todd Wyatt. Prime Prospector ran in the Maryland Hunt Cup last year and is nominated to run again this year.

The Grand National Steeplechase Races are next on Saturday, April 20 where multiple Hunt Cup nominees will run.