Senior Senator and Eric Poretz clear the final fence on their way to winning the third straight Grand National.

The feature race of the day, the $50,000 Grand National Timber Stakes, had twelve runners, eleven of which were Hunt Cup nominees. Irvin L. Crawford II’s Senior Senator, a two-time Maryland Hunt Cup winner, raced in a tightly bunch field before joining Raven’s Choice at the front. His regular jockey, Eric Poretz, piloted him to the last fence with the lead where he then drew away to a thirty length victory and his third consecutive Grand National win, retiring the Grand National Challenge Cup. Senior Senator, who is trained by Joe Davies, will attempt to win his third Maryland Hunt Cup on Saturday, April 27. If he does so, he will also retire the Challenge Cup which has not been achieved since 1983.

The race also proved its testing nature as only five horses finished the three mile, eighteen fence course. Old Timer was pulled up, Wildcatter went off course, and four horses lost their riders. All horses and riders are fine and some will attempt redemption in the Maryland Hunt Cup. Ardrahan, a talented Hunt Cup nominee, fell at the second to last fence, and unfortunately sustained a fatal injury. The risk and hardship of steeplechasing was shown but still coupled with the joys. Trainer Katherine Neilson’s other entry, Joshua G, finished second in the same race and owner Irvin S. Naylor’s Aquies won the next race. As with any sport, accidents and injuries are always a risk, but owners, trainers, and riders run their horses in the races they feel will suit them best so that they can do what they love to the best of their ability. 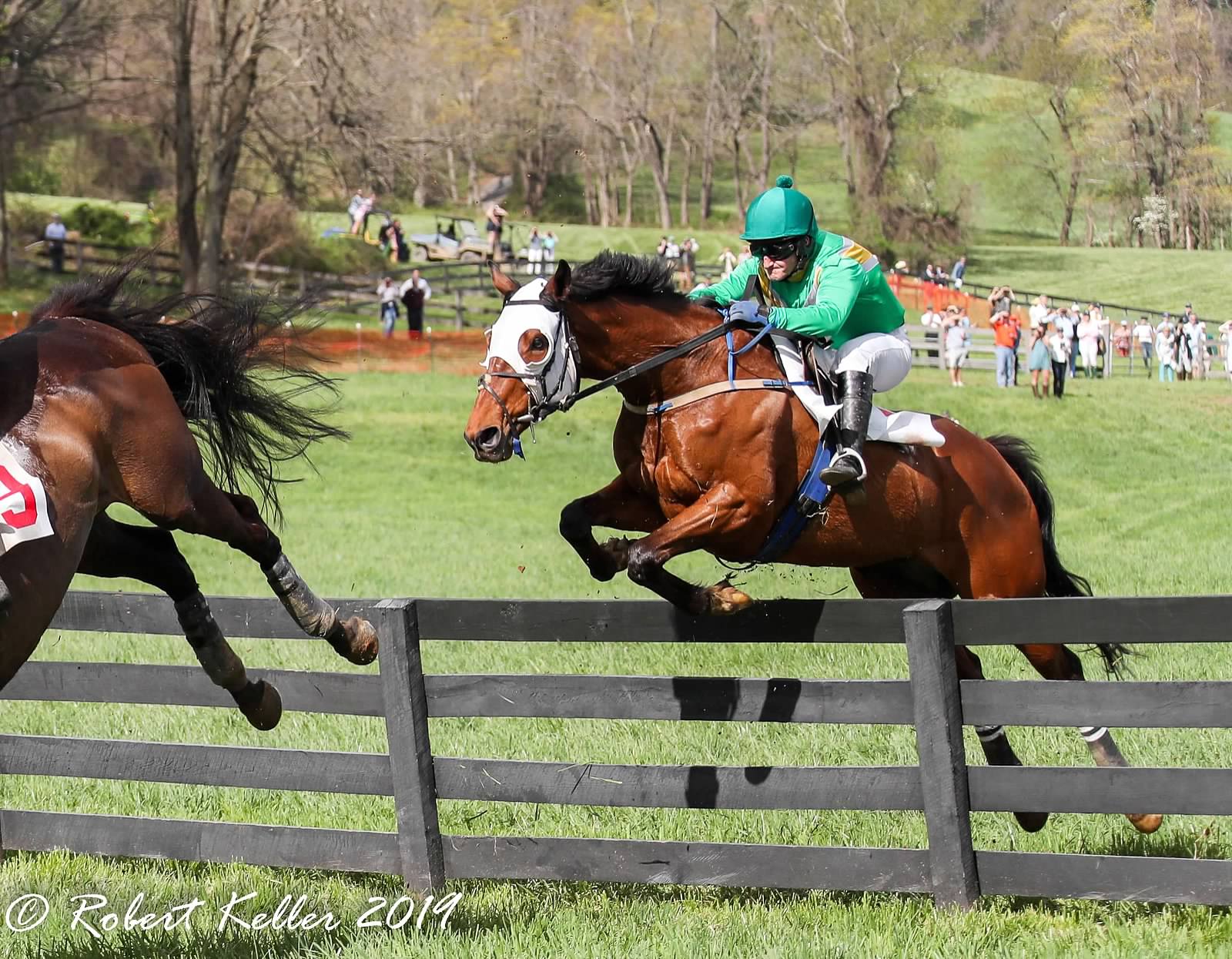 Aquies and Eddie Keating jump the final fence behind Vintage Vinnie and Eric Poretz before going on to win.

The second race of the day, the Benjamin H. Murray Memorial, was a six horse race where Irvin S. Naylor’s Aquies and jockey Eddie Keating caught Vintage Vinnie just in time. Vintage Vinnie, another horse trained by Joe Davies and ridden by Eric Poretz, led from the beginning and ended up with a dominating lead. Eddie Keating began to move Aquies closer to Vintage Vinnie as did Mark Beecher on Riverdee Stable’s Biedermeier. The large margin was closed by the final fence, but Aquies was still behind Vintage Vinnie and only took the lead to win in the final stretch. Trained by Katherine Neilson, Aquies was second in this race last year and has been nominated to run in the $100,000 Virginia Gold Cup in May.

Flaming Sword and Aaron Sinnott jump the last fence with the lead.

The third and final timber race was the Western Run Plate, a race over smaller fences for amateur apprentice riders. The six horse field was bested by Fat Chance Farm’s Flaming Sword, trained by Leslie F. Young and ridden by Aaron Sinnott. This was the five year old’s second start over jumps in America; he won a timber race at a point-to-point in Virginia in March. Aaron Sinnott, a newcomer to American racing as well, won his first race under the National Steeplechase Association rules.

The biggest race on our spring circuit, the Maryland Hunt Cup, is the next race on the schedule. Post time is 4:00 on Saturday, April 27.