It was another chilly Saturday in Maryland, this time in Monkton for the Elkridge-Harford Point-to-Point. The day consisted of pony races, timber races, and flat races. Timber horses, Maryland Hunt Cup nominees among them, used the point-to-point as a prep before running for purse money in the next few weeks. 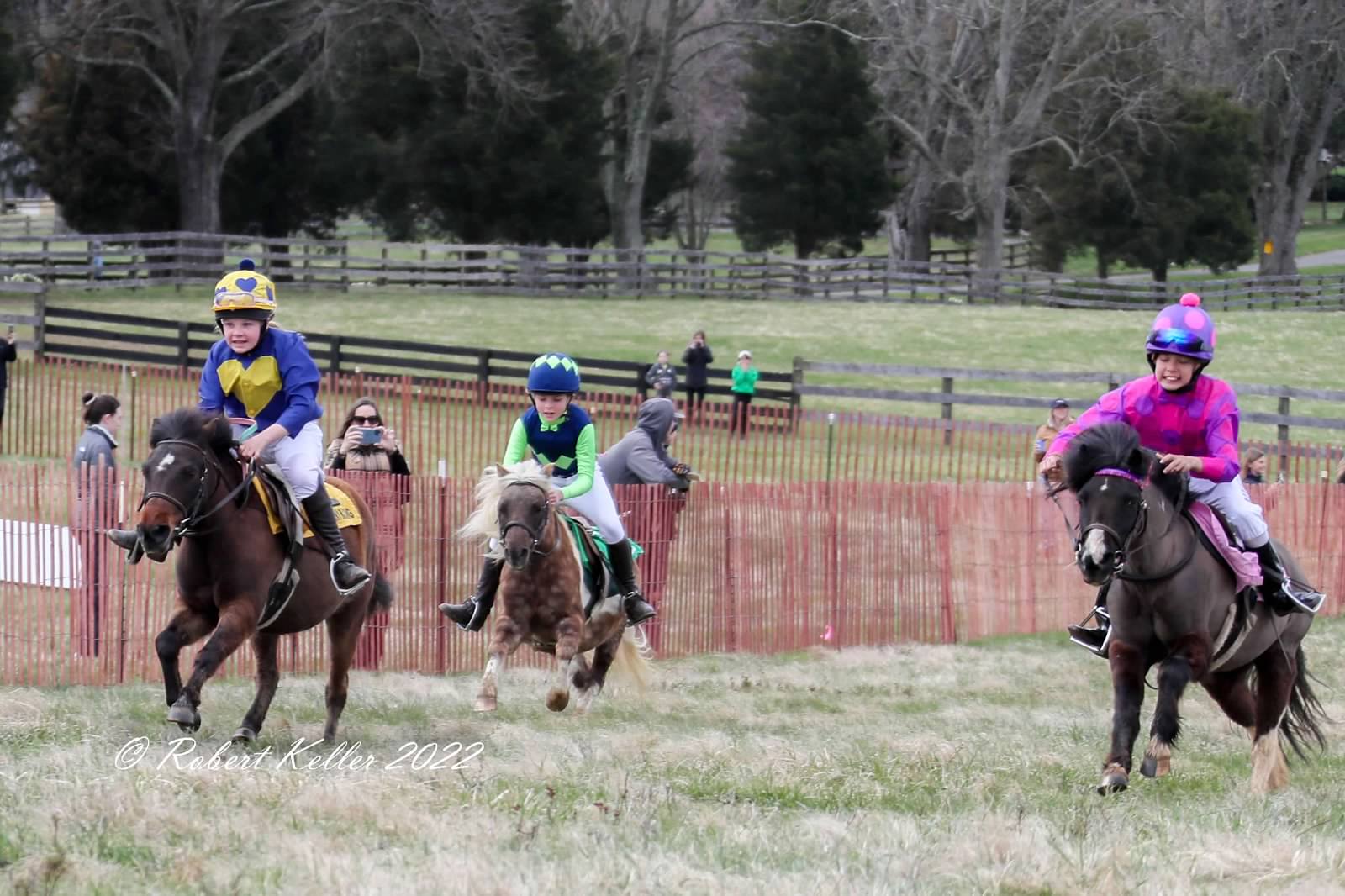 First on the card were the pony flat races, split into divisions for shetlands, smalls, mediums, and larges. The “Tad Shorter” Shetland Pony Flat was a close race, but Carroway Tuesday was the winner with Libby Tallarico in the irons. The Small Pony Flat was another close race between Blueberry and Hoof Hearted. Hoof Hearted and William Slater looked like the winners, but Blueberry and Yomar Ortiz, Jr. tracked them down and caught them before the wire. The Medium Pony Flat was won by Fionna and Ellet Sharp. Fionna broke sharp, took the lead early, and won well. The final pony flat race for large ponies was a decisive victory for Bailey, ridden by James Wyatt. 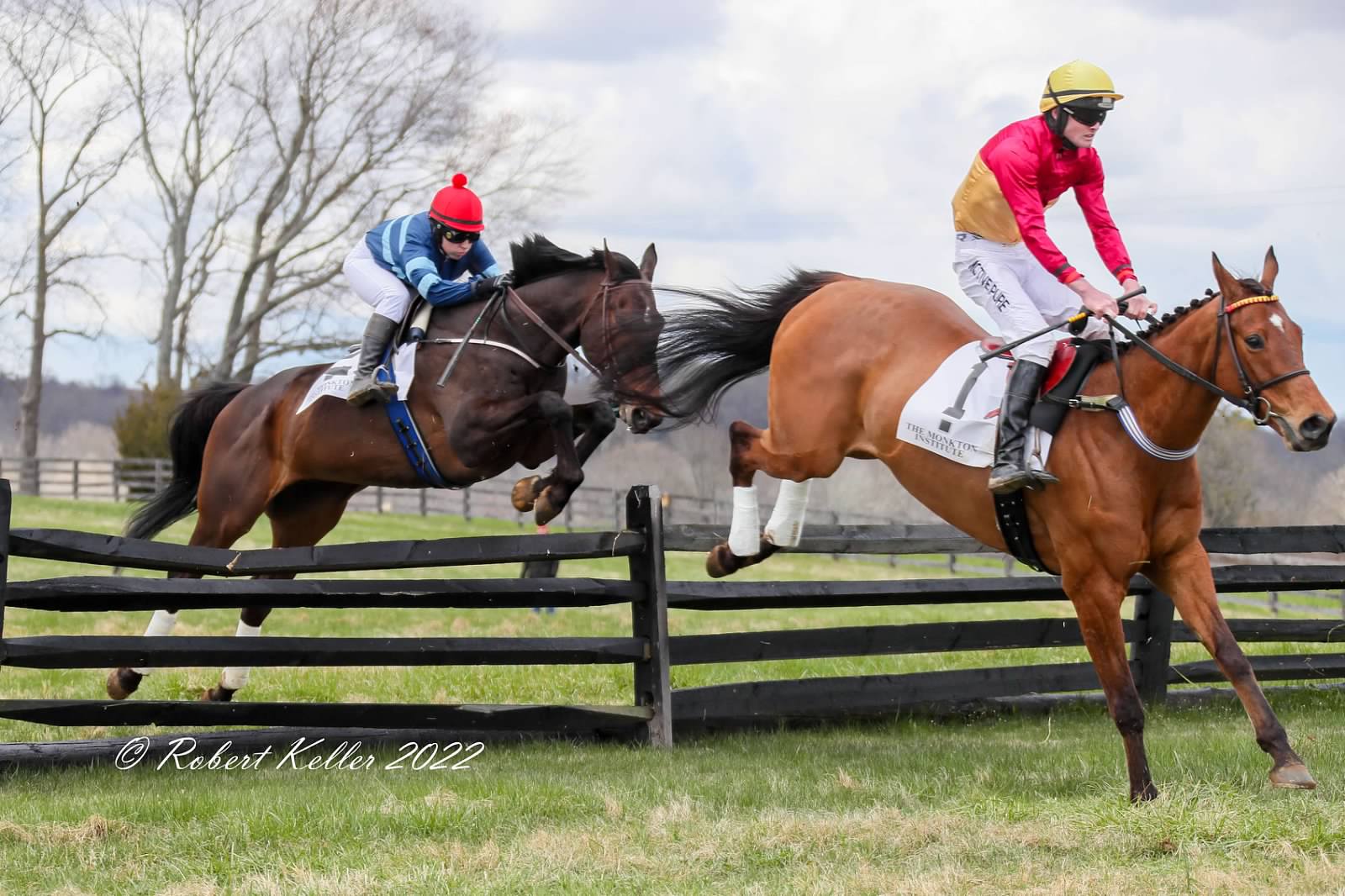 Include It and Elizabeth Scully jump the second fence behind Goodoldtimes and Colin Smith. Robert Keller photo

The first timber race of the day was the feature race, the Edward S. Voss Memorial Open Timber. It was a four horse race with the pace set by Pocket Talk and Teddy Davies. The rest of the field was content to follow for most of the race until Goodoldtimes, ridden by Colin Smith, launched a challenge. At the second last fence, Pocket Talk, Goodoldtimes, and Include It (Elizabeth Scully) jumped as a team. Pocket Talk landed the last with a slight advantage but Include It managed to get his head in front at the wire. Include It is a Maryland-bred owned by Riverdee Stable and trained by Todd Wyatt. Pocket Talk and Goodoldtimes are both Maryland Hunt Cup nominees.

The George C. Clement Memorial Novice Timber was the second race of the day. It was a match race between Profiteer and Lost Story until Profiteer lost his rider (Eric Poretz) at the third fence. Mrs. S. K. Johnston’s Lost Story, ridden by Elizabeth Scully, were left to complete the course on their own. The victory gave trainer Todd Wyatt and jockey Elizabeth Scully their second win of the day. 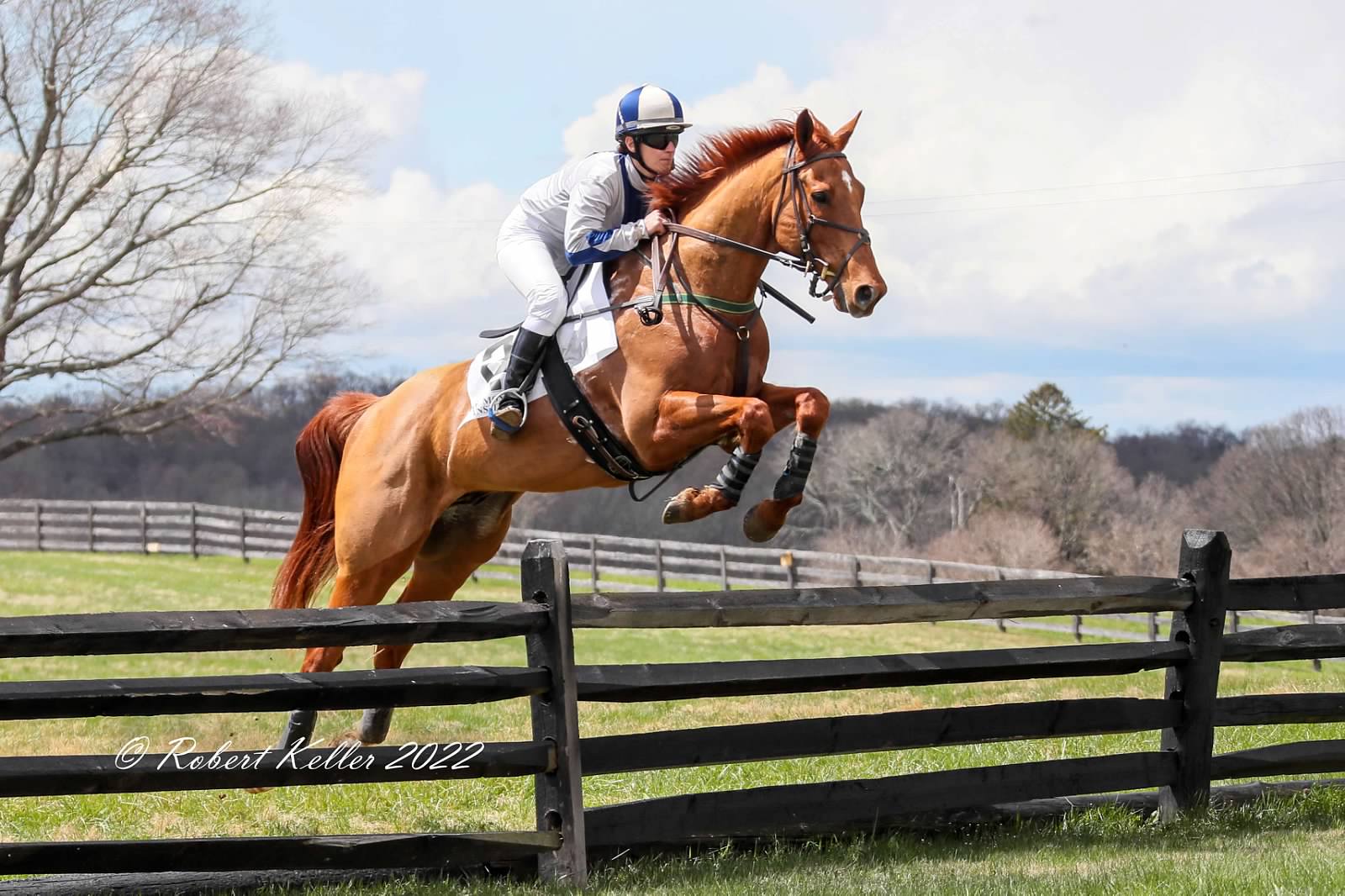 The Ann L. McIntosh Memorial Heavyweight Timber and the Leith Symington Griswold Amateur Apprentice Timber were combined. It was another match race, this time between Night Sounds ridden by Willie White, and Blackhall ridden by Theresa Dimpfel. Blackhall took the lead at the start with Night Sounds close behind. The two jumped the last as a pair, but Blackhall and Theresa Dimpfel drew away for the win. Blackhall is another Maryland Hunt Cup nominee.

After the timber races, the juniors had another chance to race, this time in the Junior Field Masters Chase. The thoroughbred horse division did a loop of the timber course before running to the wire. Prime Prospector, ridden by James Wyatt, stayed closest to the field master and won handily over Grandiflora and Jaidyn Shore. This was James Wyatt’s second win of the day and the second weekend in a row that he has won this division on Prime Prospector. Carly Kern swept the small, medium, and large pony division of the Junior Field Masters Chase. She rode Mallory in the small division, Roger That in the medium division, and Goose in the large division. 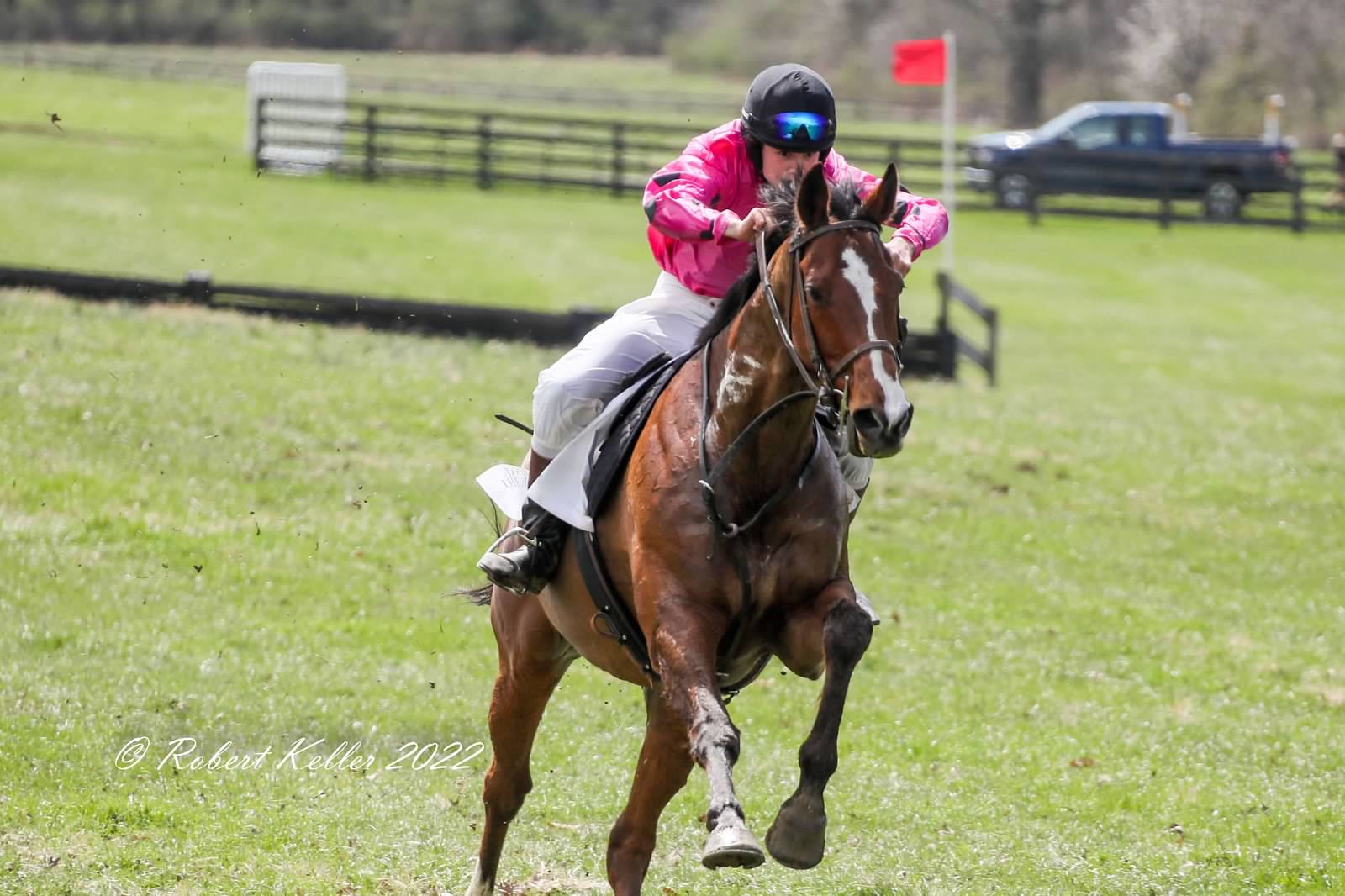 Prime Prospector and James Wyatt on their way to victory. Robert Keller photo

The day concluded with two flat races, the first being the Alfred J. Smithwick Memorial Open Flat. Willow Oaks Stables, LLC’s Shendam, ridden by Paul Cawley, led from the start and held off a late charge from Left Blank to win. It was a win on home turf, as Shendam is trained by Elizabeth Voss. The Sara Bosley Secor Memorial Amateur Flat gave trainer Todd Wyatt and jockey Elizabeth Scully their third victory of the day. Maryland-bred Lear Avia, owned by Jennifer H. Pitts, settled in behind horses, took the lead turning for home, and won on the bridle. 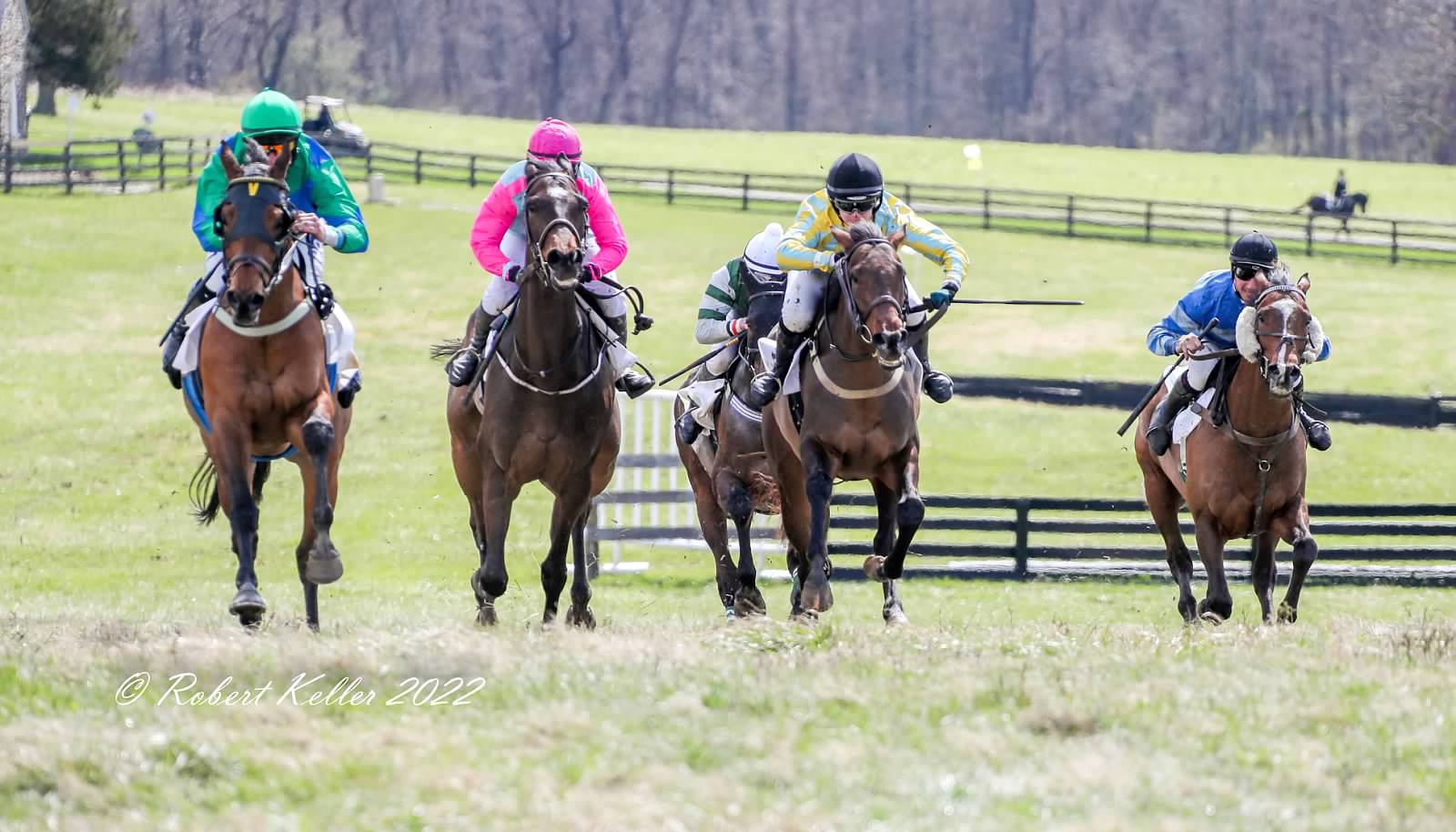 Shendam (left) and Paul Cawley hold off the rest of the field for victory in the Open Flat Race. Robert Keller photo