It was another hot and sunny year at the Potomac Hunt Races but a full and fun day despite the heat. By the time entries closed on the Wednesday prior to race day, almost all of the races had over ten entries, many had around fifteen, and the maiden hurdle race had twenty entries. On Sunday, May 19 several of these entries still showed up for the final point-to-point of the year. Potomac is one of very few point-to-points to offer prize money.

The first of eight races was the Washington DC International Open Flat Race, where Caroline Collomb’s Gold Shield was the best of seven horses. Trained by Neil Morris, Barry Foley had the ride. Gold Shield’s victory was primarily wire-to-wire and he ultimately held off Devil’s Wrangler to win by two lengths. The second race, the Peter Hitchen Memorial, was another flat race but for amateur riders. Trainer Neil Morris took two in a row with Kinross Farm’s Big Bend coming from the back of the nine horse field to win by one and three quarter lengths. Amateur rider Eduardo Leiva rode the winner and took the points for the final race in the Voss Amateur Flat Race Series. 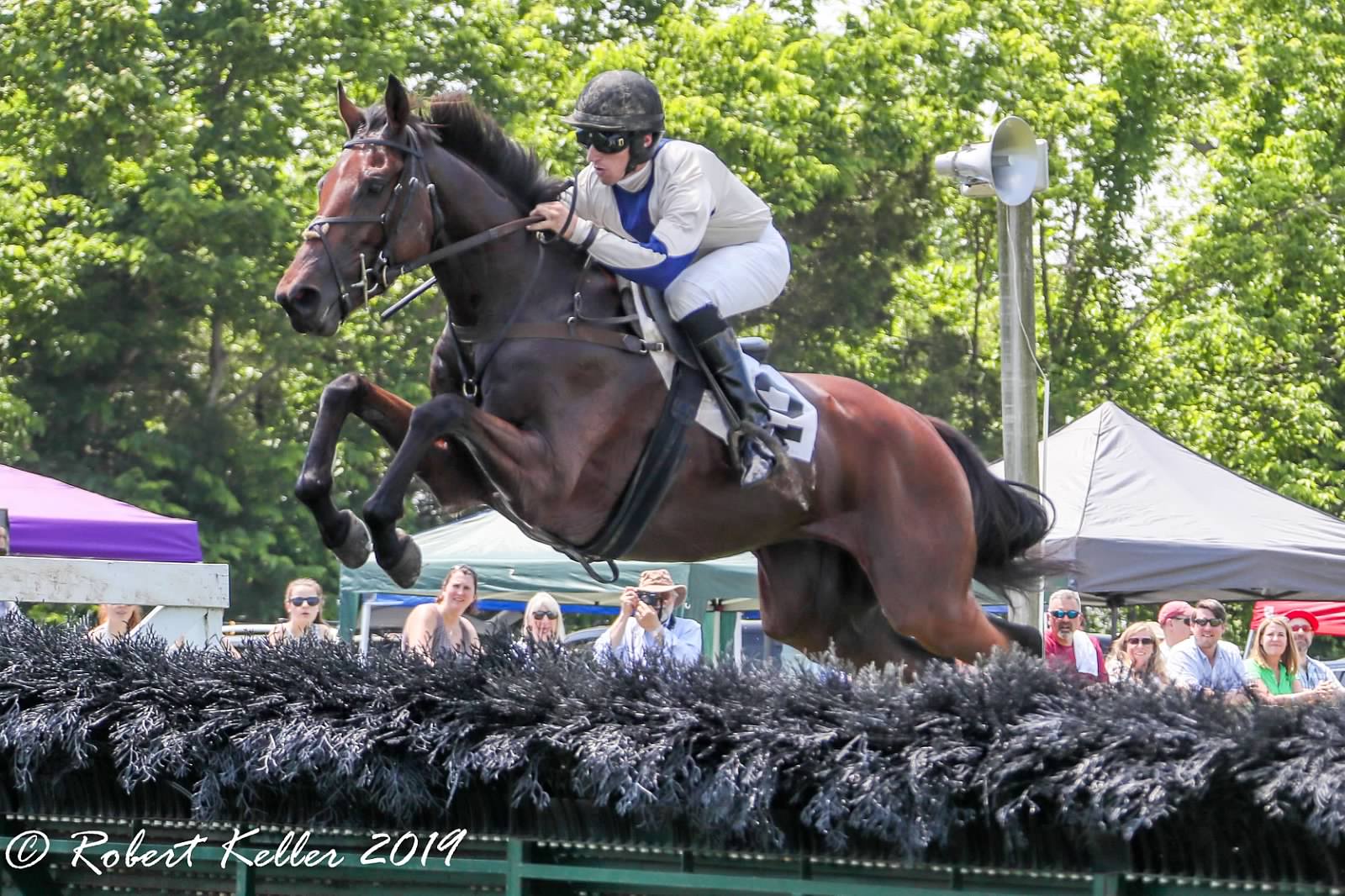 Eric Poretz and Great Road jump a hurdle early on in the maiden hurdle race.

The day moved on to jump races with the third race, the Allen Keech Perpetual Plate, a maiden hurdle race. This race had twenty entries before the day but five horses scratched leaving fifteen. The race was split into two divisions given the number of entries. Seven horses ran in the first division and it was another win for Kinross Farm, this time with Great Road. Trained by Joseph G. Davies and ridden by Eric Poretz, Great Road was close to the pace throughout the race but inherited the lead after Sunrise Sunset lost his rider. He won by two and one quarter lengths over Major Anthem.

The second division gave trainer Neil Morris and owner Kinross Farm a triple with Junonia’s narrow win. Graham Watters rode Junonia and kept him towards the back of the pack for most of the race. This was his first run for new connections since Neil Morris claimed him in a Maiden Claiming Hurdle at the Middleburg Spring Races from trainer Jonathan Sheppard’s barn. 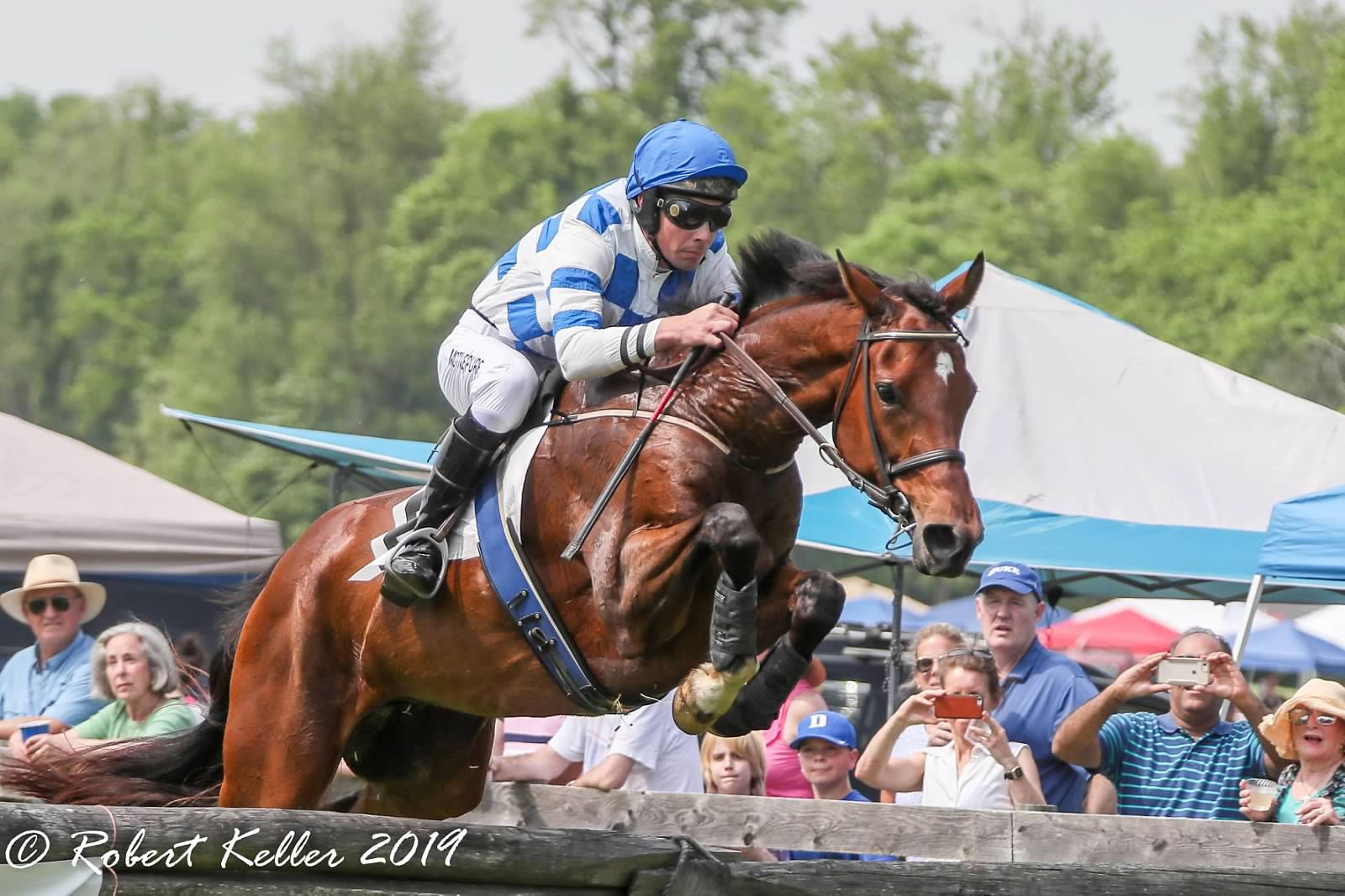 Boogie Biz and Mark Beecher in the Preakness Open Timber.

The fourth race was the $7,500 Preakness Open Timber. Six horses ran and stalked the pace of Rollforward. Boogie Biz, who had been running closest to Rollforward, took the lead in the last loop around the course and went on to an easy eight length victory.  Boogie Biz also won a timber race at the Green Spring Valley Point-to-Point, the first race of the season. Mark Beecher rode and trained for owners Happenstance and Michael Beecher.

Julie Nafe continued to do well in the side saddle circuit when she and Gun Lobby won by seven lengths over Kathryn Cowles and The Gingerbread Man.

Jack Doyle and Veneer of Charm in the lead over Kieran Norris and Big E in the Preakness Open Hurdle.

Jockey Jack Doyle teamed up with trainer Ricky Hendriks to win two in a row beginning with the $7,500 Preakness Open Hurdle Race. Veneer of Charm, a winner at Cheltenham in Ireland last year, set the pace and was closely followed by Big E, the only other horse in the race. He widened his lead on the backside and won easily. Veneer of Charm is owned by Rosbrian Farm. Kieran Norris, who rode Big E, picked up his fifth second place finish of the day.

The final race before the junior races was the Preakness Novice Timber Race. Owned by Eve Ledyard, Simenon was making his first start over timber and made it look easy. He and Jack Doyle led the whole way and appeared to have an easy victory until Rocket Star Red and Mark Beecher made a late charge and just missed the win by a nose. 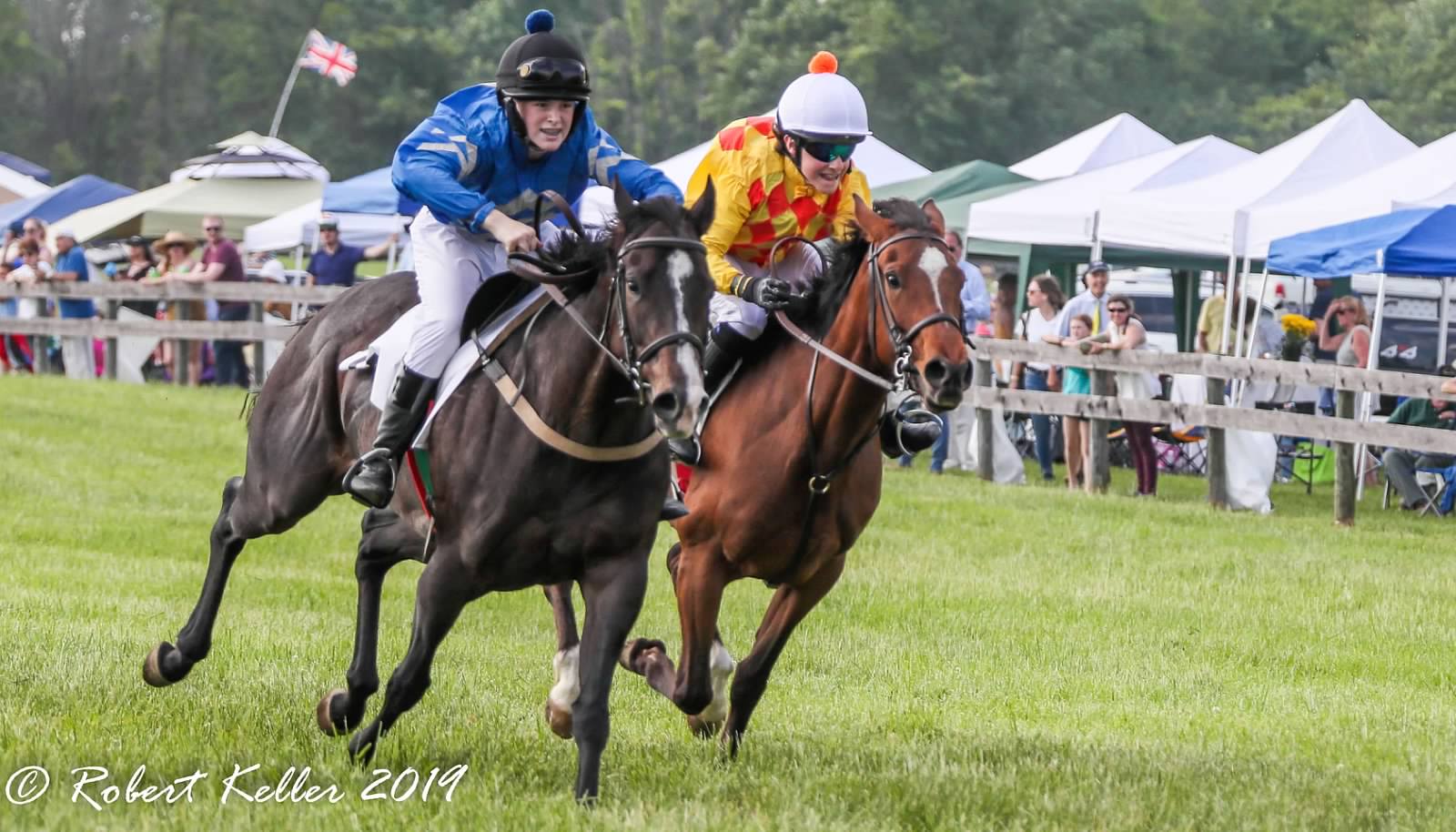 The day wrapped up with three junior flat races, the Cpl. Kirk J. Bosselmann Memorial Races. Nine small ponies ran with Mimi Schmitz’s Hoof Hearted taking a dominating twenty length victory with William Slater aboard. Elizabeth McCue’s Count Chocula, a successful race pony for the past several years, won the medium pony division with Teddy Davies in the irons. In the large pony flat race, Janneydancer and Anna Bourke came flying from behind and just caught Charmed and Teddy Davies before the wire.